Mindy Newell: These Are The Voyages… 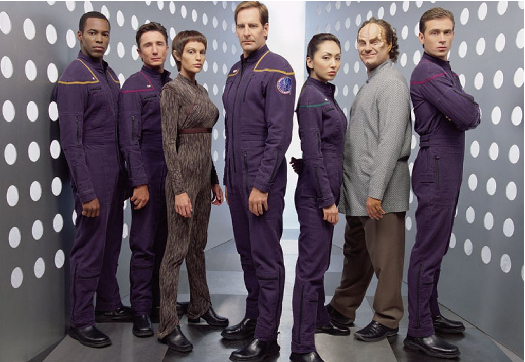 As I mentioned in last week’s column (Oh Boy), Scott Bakula also starred as Captain Jonathan Archer on Enterprise, which ran on the UPN network from September 2001 to May 2005, a total of four years. That’s one more year than TOS’s run, but three years shorter than its successful progenitors, Next Gen, Deep Space Nine, and Voyager.

UPN claimed that poor ratings caused Enterprise’s downfall; according to Wikipedia, it never rose above the Top 100 rank in the Neilson ratings system, debuting at #115, and continuing to sink until its final season, where it landed at #148. It’s generally perceived as a failure, and has been blamed for the lack of any Star Trek on either television or movie screens until J.J. Abrams’s 2009 film reboot of the franchise.

Set in the year 2015, about 100 years before the time of the U.S.S. Enterprise NCC-1701 and ending ten years later with the birth of the United Federation of Planets, I think the show had a lot of promise and so I’ve never understood exactly why Enterprise never took off. I’ve been rewatching it courtesy of Amazon Prime, and, yes, Bakula did exhibit some stiffness as Captain Archer in the first year, but certainly no less than Patrick Stewart did in the first season of Next Generation or Avery Brooks in Deep Space Nine.

As for the rest of the cast – Jolene Blalock as the Vulcan observer and science officer Sub-Commander T’Pol, Connor Trineer as Chief Engineer Charles “Trip” Tucker III, Lieutenant Commander Hoshi Sato at Communications, Dominic Keating as tactical and security officer Lieutenant Malcolm Reed, Anthony Montgomery as helmsman Ensign Travis Mayweather, and John Billingsley as the Denobulan Doctor Phlox – im-not-so-ho, from the first they all seemed to have a more complete handle on their characters than, again, any of the regular cast members Next Gen. And certainly better than most of Voyager’s crew (with the exception of Kate Mulgrew, Robert Duncan McNeill and Tim Russ) or Deep Space Nine’s regulars (with the exception of Colm Meany, who had the advantage of reprising the Miles O’Brien character, who originated on Next Gen.)

Well, first off, and again im-not-so-ho, Rick Berman and Brannon Braga made some big mistakes. The first in not using Alexander Courage’s opening riff and the introductory words:

“Space: the final frontier. These are the voyages of the starship Enterprise. Its five-year mission: to explore strange new worlds, to seek out new life and new civilizations, to boldly go where no man has gone before.”

C’mon, are you fucking kidding me? This is a show about the beginning of humanity’s journey into deep space, about the beginning and founding of the United Federation of Planets, and you don’t use these words? Words hallowed in every fan’s heart and soul, and, I bet, quite a number of people who wouldn’t actually claim to be Trekkers but who have been inspired by that phrase. I understand not using them in Voyager and Deep Space Nine, those shows’s premises were not, ostensibly, about discovering “what’s out there.” But Enterprise? Its premise is in the very name of the show!

Rather than incorporating Courage’s music into the new show’s theme, Berman and Braga chose some to ignore it completely, instead choosing to use Diane Warren’s “Faith of the Heart” which was the original theme to the movie “Patch Adams.” Now perhaps if the orchestration had been different, without the Rod Stewart-ish (and I like Rod Stewart – and, btw, Stewart did sing the song on the soundtrack to “Patch Adams”) vocalization from Russell Watson, and if it hadn’t sounded like something played on a soft-rock radio station, and if they had incorporated Courage’s opening riff into it, it might have worked… but I doubt it. The show needed something not only inspiring, something that tempted you to look up at the stars, to dream of the day we would push beyond our solar system into that final frontier. But with that song? Change the channel… please! (I’ll give you a foot massage if you do it.)

And what was with not naming the show Star Trek: Enterprise? Yeah, yeah, I know, they did add “Star Trek” to the title in the third season, but will someone please tell me why they avoided it in the first place? What did you say, Mr. Berman?

“Well, you know, if you think about it, since The Next Generation, we’ve had so many Star Trek entities that were called “Star Trek”-colon-something […] Our feeling was, in trying to make this show dramatically different, which we are trying to do, that it might be fun not to have a divided main title like that. And I think that if there’s any one word that says Star Trek without actually saying Star Trek, it’s the word ‘Enterprise’.”
Yeah, well, if you ask me, no matter what he or Mr. Braga might say, I think it’s all bullshit. I think they both just wanted to separate themselves from the ghost – or the floating ashes in orbit around Earth – of Gene Roddenberry. Y’ know… an ego thing.

Btw, I’m neither criticizing nor defending Mr. Roddenberry. His is the mind from which ultimately Star Trek was born. It was his baby, and he did what he needed to do to get the show on the air. But from what I’ve read and from what I’ve been told by some in the know, he was not exactly the “Great Bird of the Galaxy” – except maybe in his own mind. According to Marc Cushman (author of the massive trilogy “These Are The Voyages: TOS – Season One, Two and Three), the real hero of Star Trek was Gene L. Coon, the “forgotten Gene,” who invented the Prime Directive, the Klingons, the development of the personal dynamics between the Kirk, Spock, and McCoy (especially Spock and McCoy), and so much more of the ST mythos we know and love.

So, anyway, why did Enterprise fail?

I think a lot of people, including fans, I’m sorry to say, never really gave it a chance.

Not very Star Trek of them, was it?