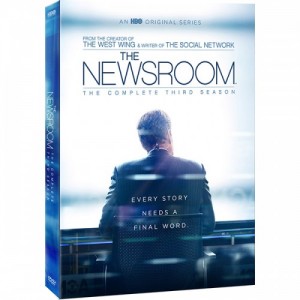 Aaron Sorkin is an exceptionally talent writer who brings a playwright’s sensibilities to television which means his characters talk. A lot. But unlike so many prime time series, his characters actually have something to say. It’s a shame more people don’t want to hear whatever it is being discussed because Sorkin series tend not to last very long.

There were two seasons of Sports Night, four Sorkin-produced episodes of The West Wing and a single uneven season of Studio 60 on the Sunset Strip. For his self-proclaimed final act in television, Sorkin gave us three ever-shortened seasons of The Newsroom. This last ran on HBO and other than using a handful of words, could have easily aired on the major networks. After all, Sorkin didn’t pander with nudity or excessive violence.

The series’ conceit was that we were watching the fall and rise of network anchor Will McAvoy (Jeff Daniels), the face and voice of Atlantic Cable Network, all all-news cable channel. As we watch him and the production staff find their mojo, Sorkin chose to set the show in the recent past and see how these high-minded journalists would have covered current events. The first season was the run-up to the 2012 election while season two covered election night and how a story blew up in their faces. 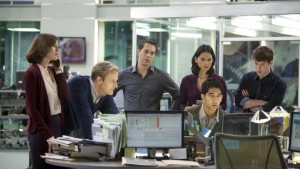 Season three, a mere six episodes in length, comes out in a two-disc DVD set on Tuesday from HBO Home Entertainment. The focus this time falls on the Boston Marathon bombing along with the network’s sale and struggles to maintain its integrity while boosting ratings for revenue. With just six hours to play with, Sorkin never let up and moved things along at a fast clip, minimizing the number of sub-plots which meant the supporting cast had less to do. In the penultimate episode, though, there is a strong sub-plot about a college rape story that caused some criticism from the pundits but the series gets credit for even exploring the subject, when few other shows have touched on it.

Daniels, Emily Mortimer, and Sam Waterston get to carry the load this time around and do so with energy and pathos. Everyone else, from Olivia Munn to Alison Pill, have their moment or two and it’s nice to see them in action. If anyone is given less to do it’s Dev Patel, whose Neal has to disappear to avoid testifying where he got leaked information that points to the Eric Snowden case. 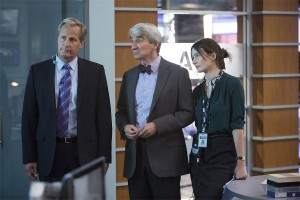 Even though it’s set in the past, it’s the very recent past so the issues of the day remain largely the same and there’s a wonderful thread about the impact social networking has had on news coverage, especially without proper vetting of sources and details. Sorkin, at his weakest, still tackles topics few other series go near and gets people on the show and then in the audience discussing the issue. He is clearly liberal in his biases but allows his characters to explore all sides of an issue. Too few prime time shows on any distribution channel truly take on the topics of the day and give their characters strong opinions in favor or escapism or “ripped from the headlines” gloss. As a result, as The Newsroom fades from memory so does the impetus for further intelligent debate thanks to characters we’re invested in.

Sorkin has come to end his series with an episode entitled “What Kind of Day has it Been” and here he brings things full circle as the death of beloved producer Charlie Skinner has everyone reflecting at the events that brought everyone together in the very first episode, when McAvoy was at his lowest ebb and needed help. While McAvoy and crew have come a long way, the series rarely let its viewers down and remained a sharp commentary on politics, media ethics, and human relationships.

The standard definition transfers are fine and makes for good watching. The sextet of episodes is accompanied by the Sorkin commentary that aired after each show. Additionally, there’s some interesting commentary from Sorkin and executive producer Alan Poul for the finale.

HBO gets kudos for airing the series at all and rewatching this reminds me how much Sorkin’s weekly presence will be missed.