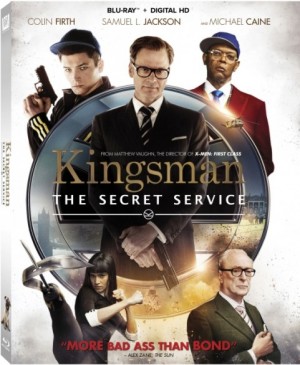 You have to give Mark Millar a lot of credit. Not only does he possess a fertile imagination, but produces works that are ripe for cinematic adaptation. A cynic could tell you Millar does this by design, but I believe he’s just in tune with the current zeitgeist. As a result, just about everything he releases gets snapped up by Hollywood and if they’re all as successful as Kingsman: The Secret Service, we’re all the better for it. The incredible streak began with the wonderful Kick-Ass, which was brought to the screen by director Matthew Vaughn and they have successfully reteamed here. 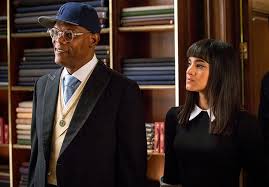 The film is out now on Digital HD from 20th Century Home Entertainment, with the DVD combo set to follow. On the extras, co-writer Jane Goldman notes how the film and comic share the same DNA but changes had to be made from print to screen so the mass wedding execution is gone but replacing it is a nice bit of backstory about the espionage agency fronted by the perfectly cast Colin Firth. Director and co-writer Matthew Vaughn speaks at length about the changes he made from Millar’s story, most notably changing the antagonist to an older man to better match him against Firth. 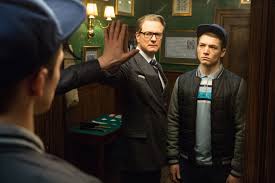 The miniseries, now available as a collection, was from Millar and Dave Gibbons, an artist who knows a thing or two about clean storytelling, despite the mayhem and bloodshed inherent in spy stories. Millar and Vaughn agreed that spies had grown too serious and the films needed to loosen up which is why with a wink and a nod this doesn’t exactly send up the genre but is just over the top enough to be immensely entertaining. One of the best touches is the truncated subplot about celebrities being kidnapped with it being boiled down to just mark Hamill, who plays himself. 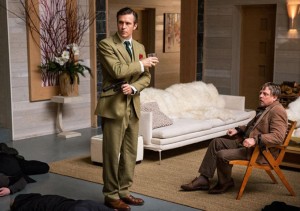 The basic premise has Harry “Galahad” Hart (Firth) recruit “Eggsy” (Taron Egerton) to join the covert spy agency. The first third of the film is about the training Eggsy and the others have to survive before going into the field. The timetable winds up accelerated when the eccentric billionaire Richmond Valentine (Samuel L. Jackson) attempts “cleansing the population in order to counteract the effects of global warming”. Very Bond, but so much broader than most of his opponents.

Running the agency, located within the Kingsman Savile Row tailor shop, is Arthur (Michael Caine), who has seen it all and brings enough gravity to make the operation seem convincing. On the other hand, Mark Strong’s Merlin is everything you want in the most hawkish military man.

Yeah, there’s tons of action and special effects and humor but there’s heart, which grounds it and makes you root for Eggsy. As we learn, his father was in the service and there’s a bond between Galahad and Eggsy which is nicely developed.

There’s little doubt that the Digital HD format is great for mobile viewing and the 1080p image is crisp and flows without hesitation. If there’s anything to miss, it’s the DTS Lossless audio track but the AC-3 audio is just fine.

Without the physical confines of the disc, it also comes complete with the Blu-ray extras so the digital age continues to transform how we consume media. There’s 1:31 of extra material, broken into sections — Panel to Screen: The Education Of A 21st Century Super-Spy, Heroes And Rogues, Style All His Own, Tools Of The Trade, Breathtakingly Brutal, and Culture Clash: The Comic Book Origins Of The Secret Service — that covers everything from the miniseries’ creation, with Millar and Gibbons chatting, to the casting, production, stunts, etc. All of it is slickly assembled and fine to watch.

Yes, the box office was surprisingly strong and a sequel is on its way but the original is tremendous fun and is a fine addition to your video library.