Bob Ingersoll: The Law Is A Ass #356: RICK CASTLE HAS A SEIZURE 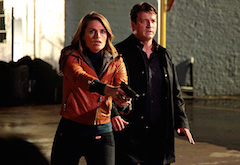 Aced her Captains Exam, my ass! Based on the level of knowledge Kate Beckett showed this week, she couldn’t have aced a Poker hand with a stacked deck.

The episode started with a Jane Doe running through some remote woods in upstate New York then out onto a road, where she was hit by a truck, and died. Someone had carved crosses onto the woman’s face, so the state troopers believed she had been attacked in the woods then chased until she was hit by the truck. The truck driver saw a dark figure wearing a mask emerge from the woods. Based on this, the state troopers classified the case as a homicide. There was a recent receipt from a Manhattan coffee shop on the victim, so the troopers called Beckett hoping she could help them track down the victim’s identity.

Accidental death by truck during a brutal assault, however, is too ordinary a case for a police procedural show like Castle. There had to be a complication. Something to give the case that audience-grabbing oomph just before the show broke away for the opening credits.

There was. First Castle recognized the facial cross carvings and the truck driver’s description of the assailant’s mask. Then Castle gave us that extra oomph.

When he was a boy, Castle chanced upon a murder in progress while walking through some woods. Castle saw the killer had carved crosses onto the victim’s face and that the killer wore a distinctive mask; the same crosses and same mask from the current Jane Doe case. Castle realized that the Jane Doe was the work of a serial killer who had been operating for thirty years.

The detectives determined that their killer du semaine must have hidden his victims’ bodies so none were ever found. They were classified as missing persons. No one knew they murder victims, let alone that there was a TV-styled serial killer involved.

No one, that is, until Castle put the pieces together. When Castle saw the killer the first time, the killer, for reasons known only to no one, didn’t kill the only person who knew about his mask and his penchant for carving facial crosses. The killer simply warned Castle not to tell anyone about what he saw. Because that’s what you want to do if you’re a serial killer who operates in such secrecy that no one even knows you exist; you leave the only person who knows you exist alive to talk to the police. Oops, let me rethink that whole not insulting your intelligence thing.

Problem was they had no proof.

Then Beckett learned the murderer’s dead parents had owned a remote farm in upstate New York near where the Jane Doe died. The farm was now held in trust now and their suspect was the trustee. Castle and Beckett realized that this remote farm was a perfect place for hiding bodies.

Problem was they still had no proof.

Beckett knew she could never get a warrant to search the farm based solely on Castle’s thirty-year-old voice recognition. “And if I searched it without one, then any evidence I would find would be inadmissible.” Okay, so far so good. Beckett showed an understanding of search and seizure law that was more than good enough to you ace a captains exam.

Then Beckett proved she actually understood search and seizure about as well as Cookie Monster understands good eating habits. “But you’re not [a cop],” Beckett said to Castle. “It would be trespassing. You would be breaking the law. But if you found something… And I know how much this means to you. So whatever you decide, I will back your play.”

The show broke for commercial. But rather than watch AT&T’s Lilly profess her love of bedazzling again, I took the opportunity to start writing this column in my head.

Detective Beckett was correct, the Fourth Amendment did prevent her from searching the farm without a warrant. Beckett was also correct that the Fourth Amendment doesn’t cover the actions of private citizens and that if a private citizen searched the farm without a warrant then gave any evidence he found to the police, that evidence would be admissible, because there was no state action involved – state action being actions by any government, either state or federal. It’s called the Silver Platter Doctrine, a term first used in Lustig v. United States, 338 U.S. 74.

Where Beckett went wrong was classifying Castle as a private citizen.

If a private citizen conducts a search while acting as a government agent, then state action does exist. United States v. Jacobsen 466 U.S. 109. If the private citizen is working with the police, than anything the private citizen finds during an illegal search is every bit as inadmissible as evidence found by an actual police officer, because, in essence, the police did find it.

It’s a two-prong test, because courts would never make anything so simple that it could be answered with only one prong. The prongs are “ 1) whether the government knew of and acquiesced in the intrusive conduct, and 2) whether the party performing the search intended to assist law enforcement efforts or to further his own ends.” U.S. v. Walther 652 F.2d 788, 791 (9th Cir. 1981).

Here Detective Beckett not only knew of and acquiesced in Castle’s warrantless search, she actually suggested that Castle commit criminal trespass in order to search the farm for the evidence to convict the murderer. Under the Walther test, there wasn’t enough doubt that Castle was acting as a police agent to give Thomas the Apostle pause.

And even Thomas would have stopped doubting when the show came out of commercial break. Castle didn’t drive up to the farm alone. Castle and Beckett drove up to the farm together. Beckett stayed in the car which was parked just on the other side of the farm’s property line and watched through binoculars, while Castle searched the farm’s barn. But Beckett didn’t want Castle “going in alone.” She instructed him to put his cell phone on speaker. Ever the dutiful husband, Castle gave Beckett a step-by-step account of what he found over his cell. At one point, Beckett even told him, “you’re gonna need more than that to call the police. Look around he may have keep trophies from his victims.” Beckett may not have been physically conducting the search, but she was directing it from long distance.

Beckett’s suggested plan of attack was one that guaranteed none of the evidence found on the farm would be admissible. Her plan actually jeopardized their chance of catching the killer. Unless, of course, she and Castle planned to lie on the witness stand about how Castle found the evidence.

But they wouldn’t do that, would they? Not even I am so cynical as to suggest that “Effective Perjury” is covered in the captains exam.