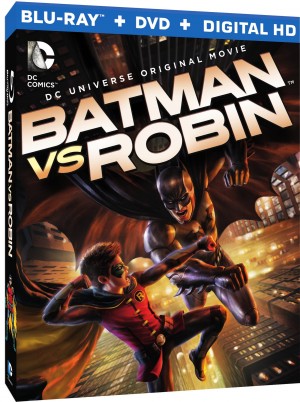 The notion of a hero having to deal with the son he never anticipated is certainly an interesting one especially with the added twist that the boy is already 10 and has been trained to be the ultimate assassin and future leader of a global terrorist organization. When Grant Morrison retconned Mike W/ Barr’s Son of the Demon graphic into the core DC Universe continuity, it had the virtue of freshness with a touch of audacity. He got far more interesting mileage out of the addition of Damian Wayne to the story than I anticipated. The core elements of that arc have been nicely replicated in the latest direct-to-video release Batman vs. Robin out now from Warner Home Entertainment. 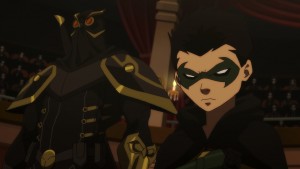 This 80-minute feature is a much stronger outing than the last few, with credit going to the decision to change writers from Heath Corson, whose efforts have been weak, to the far superior J.M. DeMatteis. I’ll stipulate that Marc and I are old pals but the adaptation is deserving of the praise regardless of who wrote it. Director Tony Oliva, who has also been involved in the previous misfires, is back and frankly, rises to the occasion by making the character bits as visually interesting as the action sequences. That said, they remain overblown including the climactic fight which is wrongheaded on many levels. 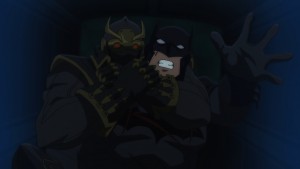 Picking up where Son of Batman left off, Damian has come to live with Bruce (Jason O’Mara) in Wayne Manor and Batman is trying to instill a sense of morality in his latest Robin, lessons never quite taught by Damian’s grandfather, Ra’s al Ghul. Damian, for his part, is impatient at every turn and is increasingly annoyed that Bruce and Batman are holding him back. Complicating matters, Batman is now enmeshed in the latest schemes from the Court of Owls, the secret long-time hidden society of Gotham powerbrokers who unleash their fist of justice, (Jeremy Sisto), when they don’t get their way. To take down Batman, they decide to seduce Damian into siding with Talon. 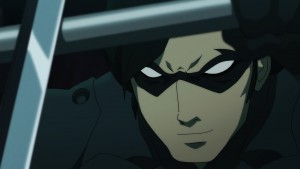 DeMatteis’ script takes the broadest of strokes from Morrison’s stories and melds them nicely with Scott Snyder’s more interesting issues of Batman.  As a result, the story’s best moments can be directly traced to his work such as the constant contrasts between Batman/Robin, Bruce/Damian, Damian/Dick, Batman/Talon, and so on.

Although the story frequently wants that Damian is only 10, he continues to display skills, knowledge, and attitude way beyond that of any 10 year old I know. On the other hand, emotionally, he is fragile, jealous of Dick Grayson, annoyed at Ra’s and Talia for abandoning him, and pissed at Bruce for not treating him as a peer despite clearly not being ready. 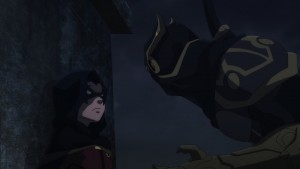 The film is not perfect. The film opens with Damian having stolen the Batmobile to take down Winslow Schott, called the Dollmaker here, and not the Toyman – which makes no sense. Gotham has enough oddball villains, one drag one in from the Superman books and then make him look like Jason from Friday the 13th? Then we get to the major battle in the Batcave, which is far too easily breached. Nightwing is literally pinned from shoulder to legs by the Talons but shakes off the multiple wounds without leaving behind a drop of blood or appearing weakened. Similarly, Batman takes a beating in a museum and then in the Batcave, including what might appear to be a mortal gut wound, but moves around without wincing, bleeding, or weakening.  There seem to be an endless supply of resurrected Talons which beggars credulity. Oliva’s propensity for drawing out the action sequences needs to be reined in already. 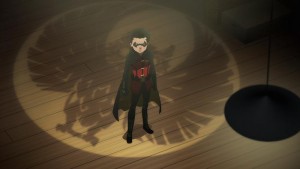 The story avoids the death and resurrection of Damian (for now) with a far more satisfying conclusion where Damian wants to take control of his destiny, no longer a pawn between parents and their conflicting agendas.

The character designs are still annoying with overly angular faces and impossible muscled necks. Bruce isn’t handsome and dashing and the various Owls, when out of the mask, are uninspired. What’s interesting about Andrea Romano’s vocal casting is that by using Sisto as the surrogate father Talon, she cast an actor who has previously been the Dark Knight in New Frontier. Intentional or not it brings a new layer of complexity to the relationships.

Overall, the Blu-ray experience is fine for most viewers. The colors are strong and the DTS-HD Master Audio 5.1 surround track quality is just swell.

Warner has released this in a variety of formats with the combo pack containing the Blu-ray, DVD, and Ultraviolet digital copy. There’s even a gift pack complete with Batman figure. The Blu-ray edition has the usual assortment of special features starting with commentary from Creative Director of Animation Mike Carlin, director Oliva, and producer James Tucker. The three have worked on enough features together they have some interesting comments here, comfortably riffing off one another, and providing context for this outing.

Gotham City’s Secret: The Mythic Court of Owls (31 minutes) is a somewhat belabored look at Scott Snyder and Greg Capullo’s layering of the Court of Owls over the history of the New 52 Gotham City. Additionally commentary comes from DC Editor-in-Chief Bob Harras (who I guess read the stories), Oliva, Tucker, and author Phil Cousineau, who has the least relevant things to say and could have been entirely excised.

The same gang of creators return for The Talons of the Owls 14 minutes) which specifically looks at the Court’s one man army. One interesting take away from these two features is that Capullo’s art, seen on the large screen, is remarkably detailed.

Coming later this year is something complete different and we get a Sneak Peek: Justice League: Gods & Monsters (11 minutes). Considering this is Bruce Timm’s return to the DC heroes after a break, it’s impressive to see how fresh his thinking is for what is essentially an Elseworlds take on the Big Three and I admit to being suitably enticed.