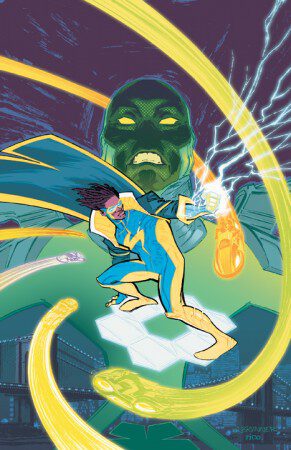 A couple of weeks ago Paul Smith asked rather or not Milestone would be better off away from DC.

Last week I addressed his question—but must now admit I did so in a drugged out haze. The drugs (some legal) affected my thought process and I’m afraid what I wrote was a result of such.

Or, it was an April Fool’s gag.

Paul, every partner in any partnership be it personal or professional will at some time or from time to time ask if they would be better off with someone else. Its human nature at it’s most pure.

I’ve asked that question, many times.

Regardless if business or personal relationship after I ask that, I ask the following, what’s my goal?

What would the goal be in leaving DC?

Yeah, right. Better than who?

The Static comic from the New 52 was marketed fine. I was in Japan, (or Paris I can’t remember, damn drugs) while there I was made aware of the new Static comic as part of the New 52. I can’t recall what made the impression (poster, in comic ad, news story) I saw but I did see it.

DC does not dictate nor do they control the editorial of Milestone. However a case could be made that Marvel, Dark Horse or Image would bring a fresh approach to the universe.

There is no one I respect more in the industry than Mike Richardson at Dark Horse at a dinner years ago, Mike ran some ideas pass me regarding Milestone.

All off the top of his head and all brilliant.

This was not a play to publish Milestone; this was two friends talking about each other’s universe and how we would play in the other’s sandbox if we could. I remember something Mike said about Icon ‘going all the way Right’ a reference to Augustus Freedman’s political leanings. For my part I suggested the next Star Wars mini series be set in Compton and Luke join the Crips.

Yes-It’s quite possible that a new editorial partner may be the ticket.

But a ticket to where?

A move anywhere would be a massive undertaking as this is the real world of real business we are talking about. No other publisher has come at us (some have come) with anything that would warrant a move from DC.

Perhaps it’s a good time to point out that the DCU is and has always been my favorite universe. Before I disappeared off the creative map to carve a career as an entertainment executive, deal maker and Master Of The Universe I did some very and I mean very high profile projects with DC well before Milestone.

For a brief time DC Comics was my home and there was no place like it. Really.

That all changed when some in power at DC decided I was a problem. I was deemed a ‘loose cannon’ among other things and my ‘fuck you and your family’ attitude did not help.

The word was out at DC and so was I.

At the height of the Davis/ DC feud, a former head of Warner Bros. Animation had me thrown out of the Animation building. The building where Static Shock was produced.

That last little moved cost them.

And that is all I’m going to say about that.

My relationship with DC now is fine. In fact twice I was very close to a massive mini-series deal there but alas it was not to be. Diane Nelson and I chat every so often. I like her and have since we met a decade or so ago when she was at Warner Consumer Products.

Not so long ago the mere mention of a Michael Davis project at DC Comics would have provoked laughter from those who sat on high. Now—if laughed at its because something is funny or it sucks…most likely both.

That’s an enormous sea change from the climate that was.

Those who know me, know that I’m not afraid to call spade a spade—I’m the last person anyone in their right mind wants to get into a shouting match in public with because when I shout I don’t give a fuck…

I don’t give a fuck.

In 21 years I’d had more than enough reason fueled by righteous anger to wage a loud public war against DC but I have not.

I’m a lot of things but I am not stupid and that is why at no time have I ever thought the Dakota Universe would be better off somewhere else. In 21 years there has been plenty to complain about and to question.