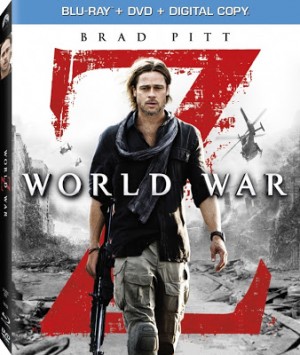 Everyone seems to love zombies these days. When I student taught, my eighth graders all wanted to write zombie apocalypse stories, fueled by AMC’s Walking Dead, countless video games, and numerous movies. Of course, to me, a zombie is far more supernatural, far rarer and the stuff of myth and legend. As a result, I’ve never really cottoned to these undead that owe more to George A. Romero’s 1968 classic Night of the Living Dead than voodoo tradition. That said, every now and then one of these tales rises to the top and screams for your attention.

Max Brooks’ clever account World War Z was one of those stories, a survival journal that was nicely written. As a result, it was optioned and after its troubled production, arrived this summer to beat expectations and prove to be an engaging bit of popcorn entertainment. Leave beside the dramatic issues plaguing it during production, what matters is the final product, out now on home video from Paramount Home Video.

The script ‘s challenge was turning the book into a coherent story for film and Matthew Michael Carnahan largely solved that by focusing on Gerry Lane (Brad Pitt), a former United Nations investigator. Retired, he was enjoying the good life in Philadelphia with his Karin (Mireille Enos) and his daughters Rachel (Abigail Hargrove) and Constance (Sterling Jerins). One day the zombies arrived and he had to protect his family while at the same time, use his experience to help figure out what has happened and how to contain the uncontrollable. How do you stop someone who twelve seconds earlier was a normal person but was now out for your blood? And how did it all begin, was there a cure?

Deputized by Deputy Secretary-General Thierry Umutoni (Fana Mokoena), Gerry goes back on active duty and the roller coaster ride of a movie begins. There’s globetrotting, near-death experiences, explosions, screaming, and plenty of zombies. In a nice political touch, there’s a hint from Captain Speke (James Badge Dale), that Israel knew about this before the disease was unleashed.

Wisely, director Marc Forster keeps things moving so you never stop to realty-check some of the thinner plot points or even remember to eat your popcorn. He makes us feel this really could be the final zombie apocalypse story, the one that can’t be topped. Ever. Everything you want in such a film is here and then some.

Pitt’s everyman guy gives us someone to root for and he grounds much of the action through sheer force of personality. When the story stopped working, Drew Goddard and Damon Lindelof stepped in to revise the script, including its troubled third act and the two brought their genre cred with them and it helped strengthen what could otherwise have been a train wreck.

Overall, the film transfer is good but not great, more than sufficient to enjoy at home, coupled with stronger sound.

The combo pack offers the film on Blu-ray, DVD and digital copy while the high def disc comes with a 10 minute longer unrated cut that’s more of the same and you have trouble figuring out what was added. It also comes with a bunch of extras including Origins (8:21), a look back at the book and its impact; Looking to Science (7:28) for clues as to how such changes could really happen;  WWZ: Production: Outbreak (8:31), The Journey Begins (8:39), Behind the Wall (9:41), and, Camouflage (9:25), a nicely detailed look at the making of this feature. If you want even more, Paramount once more offers store exclusives: Wal-Mart has an hour of exclusive streaming content via Vudu; Target has an exclusive slipbox with an art book; and Best Buy has a different exclusive slipcover and alternative streaming content. Man, I hope this trick fails and they stop it before the next wave of releases.