Martha Thomases: The Nerdification of America 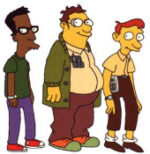 While most of us were going about our days, living our lives, the prevailing culture has become progressively nerdier. I don’t mean that there as been a renewed interest in science and math, because that would imply that we would exert ourselves mentally, and, as Americans, we don’t like to exert ourselves. What I mean is that there is more attention paid to comics, science fiction and fantasy, and that a lot of us know who Steven Moffat is.

In general, I think this is great. As more people celebrate their love of the more nerdy aspects of popular culture, more people might find out about them and find enjoyment as well. I’m all in favor of more pleasure in life. That applies to food and music and gardening as well as entertaining. In these specific case, I’m also pleased because a bigger audience means more job opportunities for me and for people I like.

However, it also means some of the less savory aspects of nerd culture are becoming commonplace. As this woman notes, women who express an opinion online are often insulted in ways that demean them sexually and violently. This is something that has been all too common in comics, where women had traditionally been treated as if we were a different species.

Why do some men think it is acceptable, when they disagree with a woman on some subject, to write comments that threaten her physically? Why do they think it’s acceptable to use her appearance to discredit her thoughts? Yes, I know that not all men make these comments, but they are so prevalent that one can only assume the perpetrators consider this to be reasonable discourse.

I mean, there are all kinds of men with whom I disagree, and I have never, not even in the heat of the moment, felt I could say, “You don’t know anything because you have a tiny tiny dick, and I’m coming to cut it off and shove it up your ass so you can see how little it really is.” Until I tried to imagine a parallel threat to those of the commentators, I never even thought of such a thing. And I have really sharp knives in my apartment.

Internet threats are mostly empty, but that doesn’t mean they are harmless. They have an inhibiting effect on discourse, which is a threat to our democracy. In many cases, such as those in which physical violence is threatened, they are actually illegal. I have a bigger problem, though, in that, as nerds and geeks, we should know how painful insults can be. We should be especially resistant to replicating these tactics precisely because we’ve felt it ourselves.

On Monday my pal Jason Scott Jones used his Facebook page to link to an incredible article about what it meant to be black before Dr. Martin Luther King, Jr. He describes a culture in which African Americans lived literally in fear for their lives every time they went out in public – and sometimes when they stayed home. I’m not kidding when I say that this made my head metaphorically explode. I mean, I knew it wasn’t easy, but I had never before thought about how it felt to walk around with that level of threat and dread.

I’m not comparing to being threatened on the Internet to living in constant fear of being lynched. Instead, I’m using my experience to get a feeling for what that felt like. I hope, if I had been in those communities, I would have stood up for those being threatened. I hope I would have rooted for the underdog.

That’s what nerds are supposed to do.