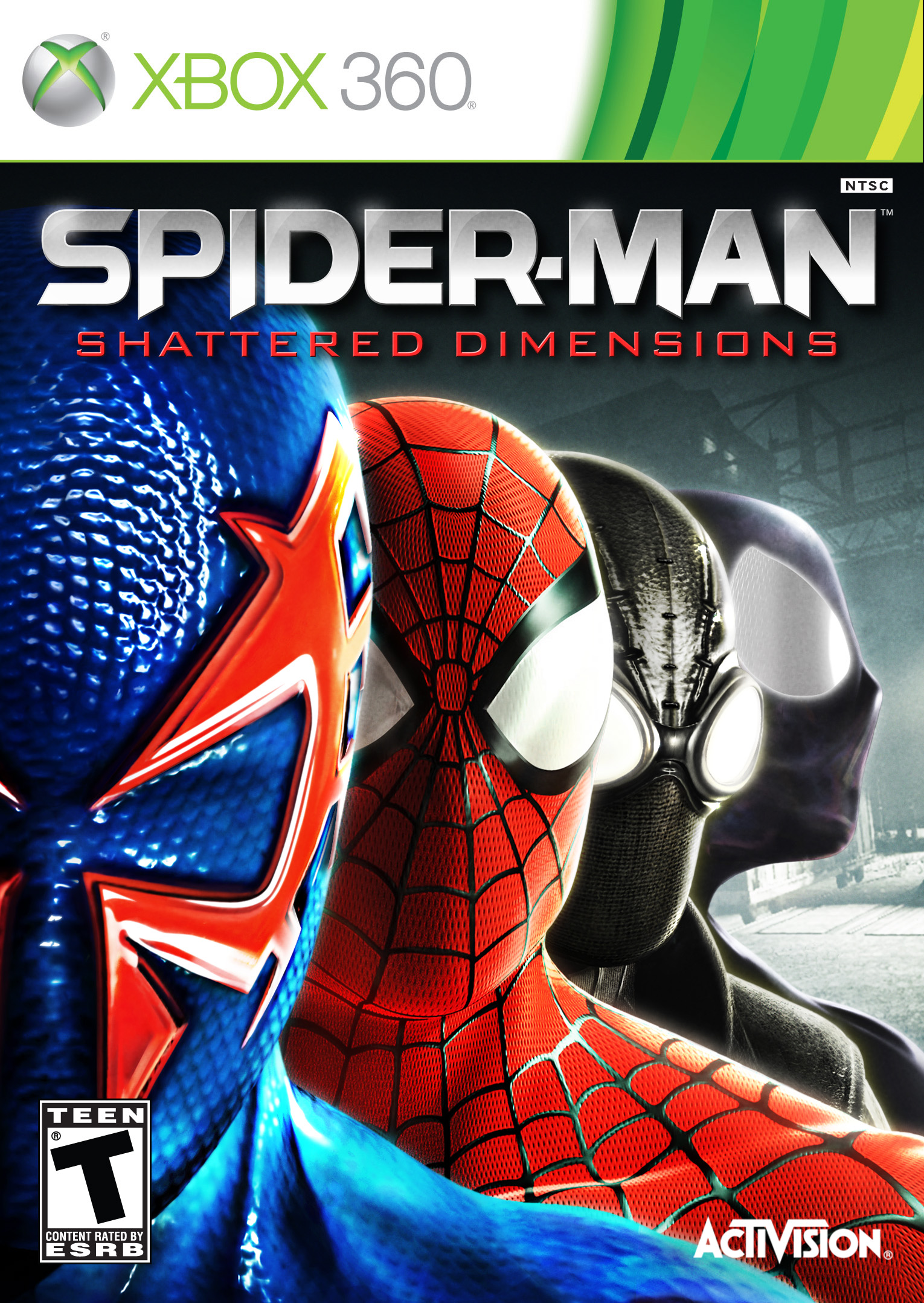 I’ll admit it: I’m a sucker for[[[Spider-Man]]] video games. Good, bad; I’ve played them all (own them all too).  So when they announced Spider-Man: Shattered Dimensions

where you’d be able to play as four different Spider-Men across four different dimensions, I was sold.  Taking Amazing, 2099, Noir and Ultimate (in the symbiote suit) and having them all working toward a common goal (save their universes, and all the other ones) is pretty daunting…what makes it more so is making each version unique and fun.  After some stellar games in the past years (the ones based on the first two movies) and some not so stellar ones (the one based on the third movie), it’s high time ol’ web-head got a title befitting his comic roots…all of them.

It seems Mysterio has found a mystical tablet that grants him unimaginable power…and of course Spidey has to show up in the nick of time and thwart his schemes…sort of.  In the fracas, he accidentally shatters the tablet, sending pieces of it across dimensions.  With the help of Madame Web and the other versions of Spider-Man, he must regain control of the fragments before they fall into the wrong hands…and rips the universe apart in the process.  There’s plenty of fan service throughout, but is that enough to make a good game?

Ditching the “sandbox” pen world of the previous Spider-games, “Shattered Dimensions” instead places gamers into a level by level structure with the webbed hero.  Each version of Spidey plays differently, and each level is built around that particular versions strengths.  For example, Spider-Man Noir is all about stealth, as he webzips silently around the level, taking out guards without being seen so as to not raise any alarms.  While he can fight, he’s not as strong a fighter, and it’s best if he turns and runs if spotted, sticking to the shadows.  Spider-Man 2099 is heavily combat-based, using “accelerated vision” to slow things down and take in the combat, bullet-time style.  Ultimate Spider-Man is wearing the symbiote costume, so his rage can get out of control, allowing for more vicious and brutal attacks.

The game is split up into three acts, with a level for each Spider-Man in each act, culminating with one finale showdown using all four heroes against their common foe.  After you beat the first level of each act (as the Amazing version of Spidey) it unlocks the remaining three, which you can take on in any order.  The style of each level and version of Spidey is unique and varied. Amazing Spider-Man has an almost cell-shaded look to it, while 2099 is all gloss and tech-y.  I must admit that I’m not familiar with the Noir version of Spidey, but after playing this, I’m definitely seeking out the graphic novel collection, as this psuedo-SteamPunk style set in the 30’s is really quite cool. 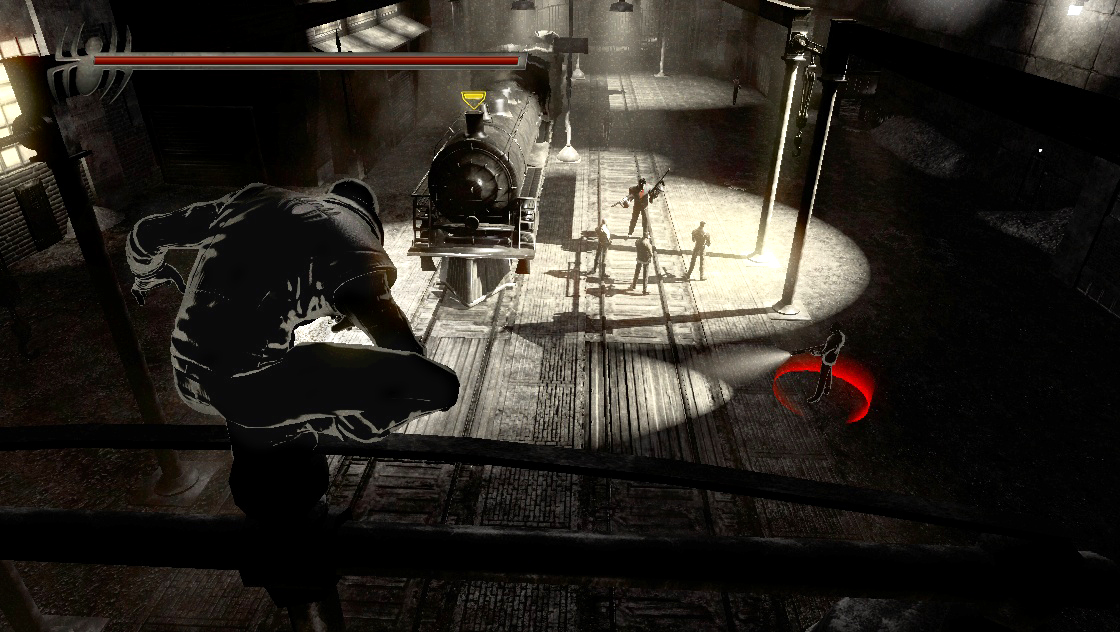 As you battle your way through each level, taking out henchmen on your way to the big baddie of each level, you earn “spider essence” which you can use to purchase upgrades.  Be they new fight combos, costumes, health upgrades, whatever.  Each level also has a series of hidden spiders and challenges to complete, which when completed unlock more things for you to spend your spider essence points on.  This is where the different costumes for Spider-Man that we featured the videos of a while back come into play.  There’s a LOT more than just the 4 they revealed, and long-time fans will see a lot of cool things.

In fact, there’s a lot of fan service in this title.  While most enemies are ones we know, some of the iterations of them are brand new, such as the 2099 version of Hobgoblin, or the Noir universe’s Hammerhead. The character design here is fantastic, and these versions of the characters fit perfectly into each universe.  Something also must be said for the voice work, as each version of Spider-Man is voiced by one of the actors who voiced him in the cartoons.  From the recent “Spectacular Spider-Man” to the original “Spider-Man & His Amazing Friends”, each Spidey is unique and familiar to fans of the character.  In fact, here’s a small video about who portrays whom:

As for the gameplay itself, it’s kind of a mixed bag.  While there’s plenty of combat in each level, the way you go about your plan of attack can vary.  Amazing, 2099 and Ultimate fight fairly similarly, but Noir is more of a stealth guy, and can get overwhelmed in a fight rather easily.  Noir’s levels in particular actually seem like the Spider-Man answer to “[[[Batman: Arkham Asylum]]]” as you sneak around taking out baddies before they can shoot you down.  2099’s levels are probably the weakest, as they’re just fight after fight with no real challenge to them outside of some annoying free-fall sections.  Amazing and Ultimate are practically the same, save for the Ultimate’s rage meter.

Still, it doesn’t make it a bad game.  Far from it, as there’s a good story here, and plenty of challenges and unlockables to keep players coming back and re-doing levels they’ve completed for more bonuses.  If you’re a Spider-fan like me, there’s a lot to uncover.  While it may not be the longest Spider-Man game in recent memory, it’s still a good one, full of fun fan service moments (Spider-Ham, anyone?), cool characters and a lot of stuff we haven’t seen in a Spider-man game.  It’ll make a good addition to your collection…if not a tad on the repetitive side as far as combat goes.  On the rent it/buy it/skip it scale: BUY IT!