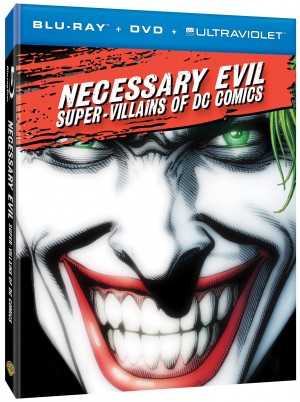 There are times one wonders what synergies truly exist between parent company Warner Bros and DC Entertainment. Normally, the studio cherry-picks properties it wants from its subsidiary and rarely does DC get something in return. However, as the company planned its mammoth villain-centric fall publishing plans, they managed to corral the studio into helping create and market the just released Necessary Evil: Super-Villains of DC Comics. The 99-minute documentary features sound and fury but its significance is obscured.

Watching it, I kept wondering who this was being marketed to since casual fans of the movies, television shows, or video games lack the context to comprehend much of what the host of talking heads had to say. Even current readers of the New 52 might be confused by the various iterations of the villains as they have appeared through the years.

With Christopher Lee trying, and not entirely succeeding, at using his marvelous voice to lend gravitas to the overwrought script, we are taken through a series of thematic chapters exploring the nature of villainy. What is entirely lacking is any sort of historic context to put things into perspective.

At first, larger-than-life heroes evolved from their pulp ancestors to tackle four-color criminal masterminds, corrupt government officials, and the occasional mad scientist. Heck, Superman didn’t really meet a serious threat until the Ultra-Humanite at the beginning of his second year. At least Bob Kane was faster to have Batman deal with the Mad Monk and Hugo Strange in his inaugural year. The Golden Age of comics saw a plethora of heroes and heroines arrive without as much thought being put into their opponents resulting in a mere handful of worthy adversaries being revived through the years.

The exception is Batman, where Bill Finger clearly recognized the need for a bizarre rogues gallery, much as Dick Tracy had his grotesque villains in his newspaper strip. It really wasn’t the Silver Age of the late 1950s before other heroes were given a significantly interesting collection of villains demonstrating an evolutionary leap in the sophistication of the premises and storytelling. 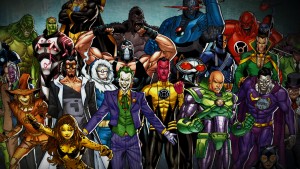 You wouldn’t really know any of this from the documentary which focused more than 99% of its art from the last half-decade or so and all its talk was a jumble so we’d go from someone discussing a theme to someone else discussing a specific bad guy and his ever-changing motivation. In listening to co-publishers Dan DiDio and Jim Lee, one would think every story has to feature a good versus evil confrontation and each adventure has to end with the hero paying some price for the victory. Such cookie cutter thinking may be one reason why the New 52 has been struggling to maintain readers, prompting its accelerating churn of titles.

The past is represented by Len Wein and Marv Wolfman, with a dollop of Paul Levitz while writers Scott Snyder and Marc Guggenheim seem to be the modern era. Then we hear from Editor-in-Chief Bob Harras and Editorial Director Bobbie Chase, neither of whom shows a personal opinion about the modern day bad guys. The Hollywood connection is represented by Man of Steel‘s Zack Snyder, Superman: The Movie’s Richard Donner and future Justice League Dark  director Guillermo del Toro (although Tim Burton and Christopher Nolan or David Goyer would have been nice). Animation is covered by Paul Dini, Alan Burnett, and Andrea Romano and their contributions are interesting. We even have vocal performers Kevin Conroy, Clancy Brown, Kevin Shinick and Scott Porter on hand to lend their thoughts. The most passionate of the bunch with some of the best lines is DC’s Chief Creative Officer Geoff Johns. Second to him is psychiatrist Andrea Letamendi, who brings  fresh perspective and a fan girl’s point of view. (It’s also hard to accept the speakers discussing Captain Marvel’s foes when they keep mistakenly calling the Big Red Cheese by Shazam — I know it’s  a legal issue, but still…)

The tedious enterprise ends with what is essentially a commercial for the Forever Evil event now being released. Overall, this was an interesting attempt to make noise for the entire line but it was such a mishmash of comments, name dropping, and the like that one wonders what its really trying to say.

The disc is lovely to look at thanks to the colorful high definition artwork and clips from comics, animation, and live-action productions. This Blu-ray does not come with any extras which is a missed opportunity.