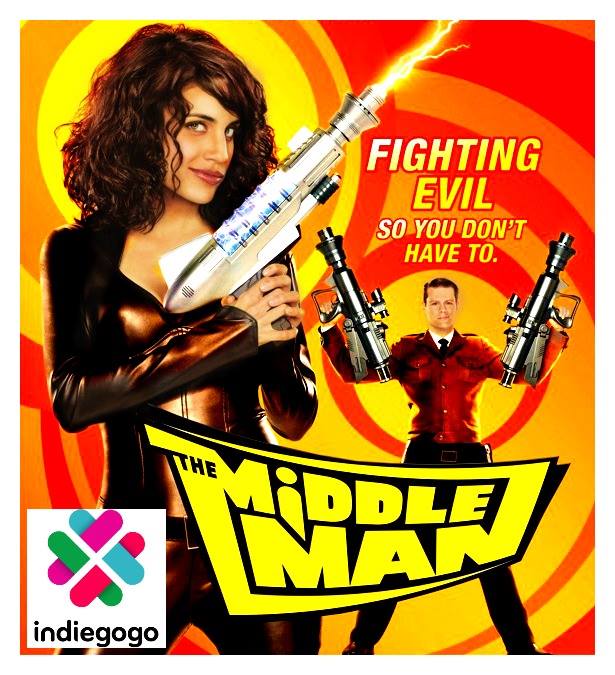 In case you weren’t already aware, The Middleman campaign on Indiegogo has just a few days left before concluding. It has proven to be a great success already, but there is still time for fans of both the TV show and the comic to get in on the action.

The Middleman‘s creator, Javier Grillo-Marxuach, was kind enough to sit down with us and answer a few questions about the crowd-funding campaign and the incredible world he hopes to bring back to life with your support.

ComicMix: To begin with, how would you describe The Middleman comic and the TV show to someone who has never seen or read it before?
Javier Grillo-Marxuach: It’s basically Gilmore Girls meets Men in Black… uh, ok, that may not be the best explanation… it’s the story of Wendy Watson, a young art school graduate with few prospects who – after an encounter with a giant monster at one of her temp jobs, is recruited by The Middleman: lone operative of an organization so secret that even he does not know who they are. Joined as a team, The Middleman and Wendy fight all threats extra-, infra-, and juxta-terrestrial, dispatching monsters, aliens, robots and mad scientists while always living up to the Middleman motto “fighting evil so you don’t have to.”

CM: What inspired you to create The Middleman in the first place and what were the influences behind it?
JGM: At the time I wrote the original script – in 1998 – there were a lot of “monster of the week shows” on the air – like Buffy, The X-Files, Angel, Charmed, what have you – and I felt that the genre as a whole lacked a certain “genre awareness” – every one of these shows featured people fighting aliens and monsters and so on, in a hermetic universe in which there seemed to be no popular culture and all these mythologies needed to be explained fresh.  I thought – “if a geek lived in these universes, no one would have to explain zombies to her!”  Also, I wanted to bring a little optimism to the genre – a lot of these shows dealt with the idea that I call “the tragedy of heroism” the notion that being a hero will mess up your life (just ask Peter Parker) – I wanted a lighter, more affirming take on the genre.

CM: When you decided to resurrect The Middleman, why did you choose the crowd-funding route over more conventional methods? How has the crowd-funding experience been for you and the project?
JGM: Because we have an established property with a small, but devoted fan following, crowd funding has been a glove-like fit and an extraordinary experience.  I think crowd funding is a great way for someone like me, who has a property for which there is demand, but maybe not enough demand to catch the attention of the major studios. Through crowd funding we have about a thousand pre orders for our new book – to a company like Disney, which owns the media rights to The Middleman, that’s not a large enough amount to move the needle – to us it’s more than enough to make a great product that truly does honor to the characters and to republish our old adventures in an exciting way.  Our fans have really stepped up to make this new book, and the webstore reprinting all the legacy material, and the cast reunion/live reading possible – so in addition to everything else, the experience has been enormously validating.

CM: Your crowd-funding project has been tremendously successful. Since the campaign has already surpassed its goal, what stretch rewards can contributors look forward to at this point? If your current top stretch goal ($85,000) is surpassed, do you have plans for another one?
JGM: Well, we have five days to go as I write this, so I am not placing bets on getting to our second stretch goal – but it all boils down to this, if we go past the 85,000 we will put any additional money into maybe doing a new book in color, or additional middlebooks down the line… it is all about keeping the Middleman alive.

CM: If you could tell one story in The Middleman setting that hasn’t been told yet, what would it be?
JGM: The great thing about The Middleman is that we have established that there have been Middlemen all through history – thanks to the crowdfund, we  are going to reprint a one-shot called “Legends of the Middleman” which we originally put out in ’06, and tells the stories of barbarian Middleman, Victorian Middleman (in which he face “The League of Professional Jealousy” when Phileas Phogg, Van Helsing and Tesla team up to stop him from solving all their cases) and World War II Middleman… in the TV show we did a story about a cryogenically frozen Middleman from the 60’s (played fabulously by Kevin Sorbo!)… but if i had my pick of any setting… I would do a Gerry Anderson Supermarionation Middleman story in which he teams up with the Thunderbirds!

Our thanks to Javier Grillo-Marxuach for taking the time to speak to us. Be sure to check out the crowd-funding campaign over on Indiegogo while there’s still time. I think I speak for all of us when I say I’m very excited for The Middleman‘s return.

DISCLAIMER: The Middleman crowdfunding project is being curated by ComicMix for Indiegogo. ComicMix is a partner with Indiegogo.

G. D. Falksen is an author, lecturer, public speaker, and MC. He also studies history, is a consultant for Disney and blogs for Tor.com and ComicMix.com. While his repertoire spans a range of topics, he is currently most noted for his steampunk work and is one of the most recognizable figures in the steampunk literary genre and the related subculture. He is the author of the Ouroboros Cycle series and The Hellfire Chronicles. Other fiction includes “The Strange Case of Mr. Salad Monday”, “Cinema U”, “An Unfortunate Engagement”, and “The Mask of Tezcatlipoca”. His work has appeared in Steampunk Tales, Steampunk Magazine, The Chap, Egophobia, and anthologies such as Footprints, Steampunk Reloaded, and The Immersion Book of Steampunk. He has appeared as a guest at various events, including Dragon*Con, New York Comic Con, and the Montreal Comiccon. He has appeared in The New York Times, The San Francisco Chronicle, the Hartford Courant, Marie Claire Italia, BoingBoing.net, Time Out New York, and New York Magazine, and on MTV, NHK, VBS.tv, Space, and io9.com. He is the lead writer for Hatboy Studios, Inc., creators of the steampunk-themed video game AIR. Mr. Falksen is represented by the DystelGoderich Literary Management agency.