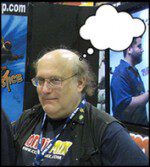 Tired, cranky, and on-deadline with an empty thought balloon hovering over my head. But I have these questions that are keeping me up nights, questions that must be answered. For example:

IDW’s Doctor Who ends at the Christmas special. They bid on renewal of the license, unsuccessfully. Others bid as well. Somebody got it, and, as of this writing, nobody knows who. Or Who. Whom? Anyway, conventional wisdom says it’s Titan Comics out in the U of K. Some think it might be the BBC itself. I think Panini might have taken a shot at it – they’ve been publishing Doctor Who Magazine for quite some time.

But for some amusing reason, the BBC is keeping quiet about it. And while they’re not known for being the most enthusiastic business people in the neighborhood, on the occasion of the Doctor’s 50th anniversary they ain’t leaving nobody’s money on the table.

2) Exiles from the DC Nation?

So everybody was running around counter-clockwise in tiny concentric circles wondering who was not going to be offered a ride to Los Angeles when DC Comics’ New York facility goes west in 2015. That loud sigh of relief you heard Monday was from the New York staffers after honcho Diane Nelson said nobody was getting fired because of the move, that everybody would keep their jobs if they so desired.

Yes, indeed. However, they have all of 2014 to thin the herd if they so desire. And offering you a west coast job without fully covering moving costs is another way to thin the herd. Of course, some DC staffers own houses, condos, or co-ops, but they’ve got a year to sell them. And then learn how to drive a car – not all New Yorkers know how to do that.

Evidently, The CW (in which Warner Bros. has a strong minority ownership position) has an Hourman teevee show in development. They’re not saying which version of the character they’re working on – is there even a viable Hourman in The New 52? – but if Arrow is any indication, they’ll pick what they want from most of them. In case you came in late, Hourman is about this dude who invented a pill that he thinks gives him superpowers for… an hour. Most latter versions featured people who were related to the original.

This is not a great idea for a teevee show. Hell, you can’t even show a bad guy smoking a cigarette on-screen. The good guy dropping a tab and flying around seems even more problematical. And when he crashes to Earth at Minute 61, they will be ripping off The Greatest American Hero.

You remember The Greatest American Hero, don’t you? DC unsuccessfully sued the producers, claiming it was a rip-off of Superman. Hey, that’s how irony works.

4) Are you Thor about this?

Marvel’s Agents of S.H.I.E.L.D. will be picking up the leftover plot strings from Thor: The Dark World. That’s pretty cool. But we’ve been warned not to expect any of the major stars to show up on the “small” screen.

I dunno about that. Maybe. But after Samuel L. Jackson showed up at the end of the pilot episode, I think everything is up for grabs.