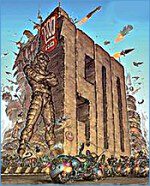 A fine friend of mine – a comic shop retailer, convention promoter, and all around great geek – tasked me with a topic for the week: the death of collect-ability. As a collector himself, my friend postulated that “[It seems like] Marvel Comics no longer has any ongoing series, and everything they create now is a limited series.” Interesting thought, no?

For those paying close attention to the racks these days (which I admit I’ve not… but more on that later), they’d note that within the big two, no issue is numbered over the forties. Between Marvel NOW and the New 52, the industry has taken a shine to newness as the gimmick du jour. Gone are the long-running series that toppled in the hundreds before they were relaunched into new volumes. Serious collectors would amass each issue into their glorious bags and boards, stacks, and boxes.

Devotees of the X-Men, Fantastic Four, Action Comics, or Detective Comics would “ride the run” as it were. Through the high times and low, the collector made a simple statement: I want all of this. When the volume ended, a new line in the Overstreet is made and thus, said geek has the ability to opt out and move on. It might also be appropriate to hypothesize that when a volume ended, it did so not at the height of its quality or popularity. As my buddy Triple H might say? It’s always about what’s best for business.

Let us dive into that then, shall we? As a retailer, a #1 is a boon for business. It’s the universal jumping on point for a reader. Sales charts proclaimed that the New 52 was an initial success. As were several gimmicks revolving around funny numbers. Marvel NOW got into the same tactics, albeit under slower pretenses. At the end of the day though, all the ongoing series now sit in their infancy, and it is perhaps leading to an antsy fan base changing titles the way they surf the Internet. Keep producing #1s and you spark the base for a quick jolt of sales each time. The same way TV launches their seasons of new shows. The same way movie studio reboot and relaunch franchises when they want guaranteed money.

I personally am not getting any book with Wolverine in it. I freely admit though that when I see a new Wolverine #1 with a new team I stop and think “maybe I should get in on that kooky Logan business…” Hell, whilst driving home from the New York Comic Con, my Unshaven cohort declared that Matt Fraction was going to write a new Silver Surfer series. Given that I loved the new Defenders mini he did (which I bought, oddly enough, because it was a #1 and I was low on books to buy that week it debuted…), there I sat, hands on the wheel thinking that it’d be worth a try. By the way, I hate the Silver Surfer. He defeated Kyle Rayner in Marvel Vs. DC in the 90’s and I’ve never forgiven him. Yet, the allure of a #1 and a creative team I like is enough to sway my snarky heart. Scary, no?

My unnamed pal noted his sadness that his newer customers would “never get to experience of watching a series / character / creative team grow”, and those words ring true. Ron Marz’s run on Green Lantern anchored my teen years. By watching Rayner grow from a newbie ring-slinger to the true torchbearer of the corps, I built a life-long love of the character. Do I feel the same way about any character I’ve read in the last several years? Hardly.

I love the Superior Spider-Man right now, but I know that love is entirely fleeting. Much as I’d hoped Dick Grayson would hold the cape and cowl of his mentor for more than a hot minute, I knew that the industry I wallow in is one of transitory entertainment. Nothing lasts longer than the sales figures allow them to. When Walt Disney’s petulant corpse and the unseen Brothers Warner loom in the darkness with gluttonous desire, the idea that a paltry four dollar rag be given years to find a voice and mature is as impossible as a mouse actually piloting a steamboat. It’s a small world after all, and it doesn’t run on dreams and candy. It runs on movie and merchandise revenue. Comics these days serve their purpose more for maintaining rights, and collecting otaku for monetary tribute. The business model for doing that simply doesn’t take into account anything more than a bottom line in the black.

One thing I’d be remiss to mention here is how my very own studio has thought of production. Our Samurnauts concept was built to be presented as a maxi-series of mini-series… if that makes any sense. Knowing our audience as we did when we started, it was hard to not want to make everything last only long enough to make it into a trade. Then slap a new #1 on the next mini, and make everyone start back at the beginning. Simply put? When I walk past an indie table, and see a series past even four issues? I’m already walking past for fear of the costly barrier to entry. While the series itself may be absolutely amazing, as a fan, I freely admit that I’m always less likely to buy-in when I know there’s a backload of material to catch up on. Comics aren’t seasons of shows on Hulu or Netflix; they’re commitments of dollars, and as such I’ve ended up becoming a slave to newness.

I open the argument to you, the people of the court. Are Marvel and DC doing you wrong by continued experimentation, relaunching, and ADHD production? Or do you like the idea that you’re never too far away from a jumping on point? Do you find the pulp of today to be too transitive, or do you like to consume your sequential fiction one micro-series at a time?