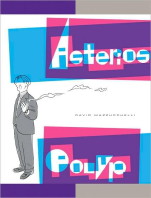 Comics are an essentially mongrel art, bred out of the
scraps of two prior art-forms in the great kennel of popular culture. That’s no
bad thing, despite what the mandarins might say – mongrels typically have the
strengths of both parents, without the fussiness and decadent weakness
characteristic of arts that only breed incestuously. Of course comics then are
called bastards, which is both a slander and absolute truth. The slander only stings
if one thinks being a bastard is a bad thing.

Asterios Polyp, for example, is a bastard, and the graphic
novel that bears his name is – and this is only one of the things it is, but we’ll start there – the story
of how he finally, much too late in his life, learns how not to be quite so
much of a bastard as he was before. We see Asterios in appropriately classical
form: both before and after his downfall, as if he’s both at once. More
importantly, though, [[[Asterios Polyp]]]
is the story of comics themselves, as it dramatizes the interplay of the
elements that come together to make up comics. Asterios is a renowned teaching architect:
serious, linear, dogmatic, didactic, Apollonian, a maker of dichotomies. And he
comes up against the Dionysian side of the world again and again, symbolically
ramming his axe-shaped head into the places where the world doesn’t fit his
categories, willing it into the forms he’s decided are right for it.

The book Asterios Polyp
moves backwards and forwards – evenly, balanced, like Asterios himself wants to
think he is – from the shattering moment that opens the story. Asterios has
been in control his entire life, probably too much in control, actually, but a fire on his fiftieth
birthday frees him completely from his past and sends him off on a journey
across America. (Yes, that again.
Don’t worry, he doesn’t go all that far, and Mazzucchelli never dwells on the
places – it’s not a travelogue, but a procession of people, and the ones
Asterios meets out in the world after the fire are very similar to the ones he
knew before the fire. He’s the one who’s different, if he can only realize it.)

In the flashbacks, which mostly trace Asterios’s failed
marriage to the talented sculptor and teacher Hana, we see Asterios always
dominating, always commanding, always declaring what is and is not so. (He’s wrong at least as often as any of us are;
this doesn’t faze or check him. Making categories is what he does; being sure
is who he is.) In the current-day story, with his past life in ashes, Asterios
is much more passive – he doesn’t seek to dominate conversations and rooms as
he did before. But he’s also finally becoming active in a different way,
leaving his cocoon of college and Manhattan for the first time in his adult
life, getting out to a world where he can do rather than say.

Dichotomies, again. Mazzucchelli has carefully constructed Asterios
Polyp as a demolition derby among
opposites: words and pictures, high art and low, theory and practice. They all
batter each other into submission, either directly or subtly, though
Mazzucchelli’s flashy page layouts or Asterios’s long speeches…and add up to a massive test bed of the graphic novel. Here, Mazzucchelli is saying: this is what I can do with this artform. It encompasses all of these things and more; I can include not just anything I want, but everything I want. And he can make it all work, too.

Asterios Polyp is
thus both the story it tells and the way it tells it, an object lesson in one
man’s story and an object lesson in how to use the levers of this particular artform.
And if the end seems to falter once Mazzucchelli has brought all of his
dichotomies back into alignment – if the deus ex machina is too obvious and heavy-handed – that, as the back
flap points out, “Mazzucchelli has been making comics his whole life,” but “this
is his first graphic novel.” It’s a beginning rather than an ending, for
Mazzucchelli if not for Asterios, a foundation to show where comics should go –
will go – must go – and not a
capstone to any completed architectural marvel.

Mazzucchelli’s art is chameleonic here, twisting to fit the very
different needs of each page and concept. His writing demands ever more, but
his art is always up to it – shifting styles and design senses and paradigms to
match. And if that ending comes up slightly lame – or blind in one eye, perhaps
– then it’s only the obligatory flaw that the greatest of craftsmen are always sure
to include in their masterworks, so as not to tempt God.