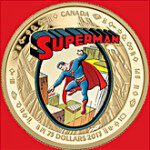 From time to time, I find myself in a sort of comfy-awe of our neighbors to the north. Of course, that’s pretty easy this week – Canada’s government is still in business and while it provides its share of amusement, at least it’s not littered with a handful of bratty children who decide to bring everything to a halt because they can’t get their way.

But, as we often say here at ComicMix, I digress. And another respectful shout-out to Peter David, who wishes he could have trademarked that phrase.

The good folks in Canada decided to honor one of its greatest innovators, Toronto-born Joe Shuster. My J-School training obligates me to point out he’s the guy who co-created Superman, but if you didn’t know that you wouldn’t be reading ComicMix.

To commemorate Joe’s existence and his contributions to our global culture, Canada released a limited edition set of silver and gold coins incorporating Superman art (not just Joe’s) and logos. There’s even some Kryptonian lettering on the coins; roughly translated, it says “Bite my Twinkie, Americans!”

And… they sold out faster than a speeding bullet. A quick check at eBay shows them offered for between $1500 and $3700 dollars. That’s in U.S. currency. But, as a comics fan since the age of four (back when all the continents were just one huge land mass), I’m hardly one to bitch about collector’s pricing. Perhaps you’ll make the comparison between the price of these coins and the price Jerry Siegel and Joe Shuster got for creating The Man of Steel, but, to be fair, we must do so in constant dollars. That means Jerry and Joe got paid approximately $2500 in 2013 dollars. So they could have taken that payment and purchased one coin. To share. Between them.

The United States doesn’t honor the creators of our culture in this manner. Oh, sure, a few get commemorative stamps, but thus far Jerry and Joe haven’t received their props. The rule of thumb is 10 years after death; Jerry Siegel died 17 years ago, and Joe Shuster went to his Phantom Zone five years before that. But a set of silver and gold coins – that reeks of permanence. It’s really cool.

It would be nice if the United States chose to honor its top comics creators in this manner. I don’t see the Treasury Department aping Canada, but I think a Jack Kirby coin would be in order. Maybe even a Batman gold coin, noting Bob Kane.

I’d buy that… but only if Jerry Robinson’s face was on the coin instead of Kane’s.