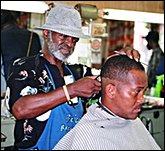 When I was around six, I was asked what kind of haircut I wanted.

This was big deal because up until then I had no say over anything in my life. This was my very first grown up decision and I had to weigh it carefully.

Even at six I knew this was a life changing moment. My mother told me to think about it while we were on the bus going to the barber shop. We lived in South Jamaica Queens at the time and except for church there was no place, no place as honored in the black community.

For me there were no two places I hated going to more than church and the barbershop.

It smelled horrible from all the cigarette and cigar smoke mingled with the distinct smell of snuff being spat into a spittoon. For all of you not familiar with snuff, it’s a type of tobacco. People would put that gross shit in their mouths between their gums and lips and suck on it until the flavor was gone then spit it out before they popped in another jaw full.

Gross with a capital GROSS.

I know some people still do that and with all due respect-that shit is freakin GROSS.

A trip to the barber shop for me was a hellish journey to a smoke filled, snuff smelling spit fest. Oh,and least I forget, when snuff is spat it’s a dark brown / almost black liquid which had a good chance of missing the spittoon and landing on the six-year old sitting in the barber’s chair at the time.

So yeah, the barber shop was horrible and in retrospect, I must have liked church better. At church I was merely threatened with Hell if I wasn’t good. At the barbershop I was spat upon with black ooze, strapped to a chair while some creature took a motorized knife to my head.

The day I walked into the barbershop ready to answer my mom’s question as to what kind of haircut I wanted that particular Hell became Heaven to me for I was no longer a child I was no longer a kid, I was, heck, I don’t know what I was but I know I had respect.

Just when I thought my day couldn’t get any better, it did. The barber did not; I repeat did not sit me in the damn kiddy contraption that boosts the height of the child.

Instead I sat (aided only by a telephone book which in my mind was no aid at all) in the barber’s chair all by myself.

At that moment I knew what I was, I was a man! A fact that was underscored by the barber when he looked at me (with what I could tell was a new respect) and asked, “Well little man, what kind of haircut would you like?”

The day kept getting better. Why? Because the entire barbershop, that to me looked like hundreds of people, heard him ask me and then heard my answer…“I’d like a Beatles haircut.”

The barbershop erupted in laughter…and just like that I was back in Hell.

I knew I was black, but why that should stop me from getting a Beatles haircut was beyond me. So like the man I was I asked and then the laughter became physically painful to me and I started to cry.

Never again did I ask for a Beatles haircut and, in fact, I started asking questions before I made statements or asked certain things.

Yeah, I was six, but I wasn’t stupid.

What, pry tell does any of this has to do with comics?

Many, and I mean many “artists” have submitted work for a show I’m curating. Some of the art is just bad that’s OK compared to people just not reading or worst even not understand what they read in the call for entries instructions.

I’m just sick to death of aspiring artists and writers who refuse to do anything but draw or write. Their work, attitudes and professionalism need major overhauls and no matter how many times or how many ways you try and tell them they still assume they can get work in the fucking comic book industry.

Or they assume they can send you entire comic books (drawn in ball point pen) when the instructions call for no more than five submissions.

Learn your goddamn craft, people. Learn what you can and cannot do. Until you do you have as much chance of getting in this show or having a career in comics as you do getting a Beatles haircut in the hood.