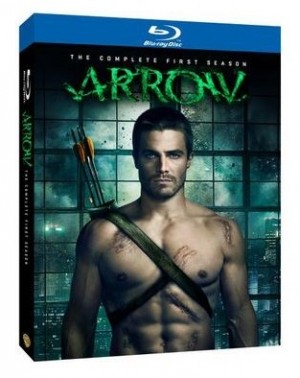 When originally conceived by editor Mort Weisinger, Green Arrow was merely a pale imitation of Batman, a stigma that wasn’t lifted until Bob Haney and Neal Adams revamped him more than twenty years later. As a result, his background and origins were largely static until the Green Arrow Year One miniseries where writer Andy Diggle posited that Oliver Queen wasn’t entirely alone on the island where he washed ashore after a boating accident. It was this fairly late revisionist history that appears to have become the new template as it continues to be used in the New 52 era and became the foundation for the CW smash hit Arrow.

Oddly, Green Arrow arrived on prime time first in Smallville (a tangential nod to Weisinger, who also guided the Teen of Steel’s adventures for the first few decades) and where Justin Hartley was a nice fit for that show, he was a little too pretty for this new take on the vigilante. The new show, returning for its second season in a few weeks, totally ignored all the mythology established in the other series and is forging a new path that is also designed to create a television universe as witnessed by the backdoor pilot for a Flash spinoff coming in November. And whereas Smallville started with the basic concepts introduced by Jerry Siegel back in the 1940s, it rapidly veered onto an original path to accommodate modern day audiences and an aging cast. By the end, the show barely resembled the source material.

Over the course of 23 episodes, Arrow started vaguely near the source material and continued to chart its own course further and further away. As a result, you can’t really compare the two as the new series now has no resemblance to the comic. That said, it makes for compelling television watching thanks to a strong writing staff anchored by Marc Guggenheim who has one foot in each world. He was aided by Greg Berlanti and Andrew Kreisberg, no slouches at television production although Kriesberg’s run as GA writer didn’t quite work.

Oliver Queen (Stephen Amell) was a shallow, stereotypical rich boy, playing fast and loose with women, living the highlife and refusing to accept the coming responsibilities of adulthood. Then came the disastrous boat accident where he watched his father take his own life to save Oliver’s and in so doing, passed on a book containing the names of sinners in Starling City. After a series of escapades that forged him from callow youth to super-hero, Queen has returned to his hometown to mete out justice.  His mother Moira (Susanna Thompson and sister Thea (Willa Holland), nicknamed Speedy; are delighted to see him but aren’t sure what to make of the man they barely recognize. Similarly, his lover, Laurel Lance (Katie Cassidy);, has to forgive him for cheating on her with her own sister, who also perished on the boat. Then there’s his best friend Tommy Merlyn (Colin Donnell), who has taken up his place in Laurel’s heart and has daddy issues of his own. 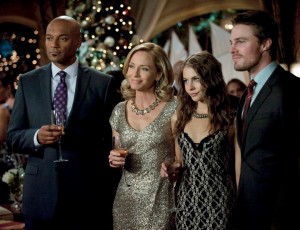 An appealing cast with dark undertones makes this the quintessential CW show and a fun look at super-heroics. Queen’s journey is twice-told, first as the returning survivor turned vigilante and also through flashbacks as we watch him learn how to fight, think, and accept responsibility for one’s actions.

Week by week, we saw the soap opera antics of the civilian cast although, as the season passed, the civilian and costumed worlds grew closer until they formed a Venn diagram of where the trouble in Starling City truly lay. Names were crossed off and the law collected their share of criminals. But something was festering deeper, underneath the city and Queen had to piece the clues together before the Glades, a dangerous and poor section of the city was about to be destroyed. Friendships were formed or betrayed, alliances formed and perceptions altered. By the final episode, it was clear that the city needed a champion and Queen was the man fate had selected. Thankfully, he knew the loner approach wouldn’t work and has been forming a team that may be all that stands between a brighter future or a bleak outcome. 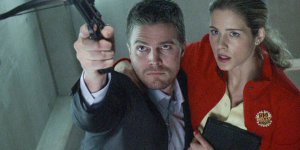 The box set comes with four Blu-ray discs and five DVDs along with codes for the Ultraviolet edition of the first season. The high def transfers are clean, crisp, and reproduce the darker tones of the series quite nicely. An episode guide is a handy touch.

As for extra, there are a handful that are more middle-of-the-road than anything special. You begin with a bunch of Unaired Scenes; the behind-the-scenes Arrow Comes Alive! (29:35) with cast and crew gushing over the creation process; Arrow: Fight School/Stunt School (18:53), shows how important the action and stunts sequences are plus how several were accomplished.

DC’s chief creative officer Geoff Johns hosts the 2013 Paleyfest (27:26) event where the Arrow: Cast and Creative Team talk about how they lifted elements from the source material and greater DCU along with how they adapted to fan buzz and turned Felicity from one-shot into a welcome regular; and, finally, there’s a brief Gag Reel (2:26).