Derrick Ferguson Takes A Trip To The DIRE PLANET 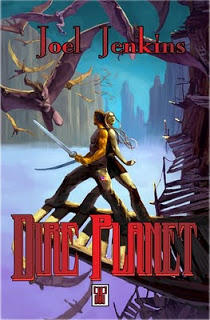 ·  Paperback: 248 pages
·  Publisher: PulpWork Press; 1St Edition edition (September 15, 2009)
·  Language: English
·  ISBN-10: 0979732948
·  ISBN-13: 978-0979732942
Not being an historian I’m not sure if Edgar Rice Burroughs created the Planetary Romance genre.  But I am certain that he refined it into something so unique and special that all anybody has to do is say “John Carter” or “Dejah Thoris” or “Barsoom” and most everybody even remotely acquainted with Pulp will know what you’re talking about.  Planetary Romance or Sword and Planet as some like to call it is a wildly popular genre in its own right.  Burroughs having struck great success with his Mars books pulled off the same trick with his Carson of Venus books.   In the 1980’s I discovered other books/series in the genre written by Lin Carter, Michael Moorcock, Alan Burke Akers and even…sigh, the “Gor” books written by John Norman.
Suffice it to say without going into detail that some of them I enjoyed and others I shook my head in downright disbelief that they ever got published.  I can happily say that DIRE PLANET by Joel Jenkins is one that I’m glad got published as it’s a wonderful example of what New Pulp is about.  Joel embraces the conventions of Burroughsian Planetary Romance but it does it with a modern day eye.  As a result it’s a book that at once feels familiar and fresh.  Just when you think you know which way the plot is going to go, Joel manages to find another fork in the road that takes you someplace else.
The Earthman taken from his native world to the planet Mars this time around is Garvey Dire and he doesn’t get there by mystical means.  He gets there by spaceship, the NASA Mars Orbiter.  Garvey Dire’s mission is not just one of exploration and discovery.  His mission is one of vital importance to the continued security and safety of The United States.  China wants to establish their own base on Mars.  And so the race is on.
It’s a race that ends in disaster when Garvey’s ship crash lands on Mars.  With his leg broken, losing air and blood, it seems as if Garvey’s story is over.  But that all changes when he sees the image of a gorgeous green skinned swordswoman in armor.  And it’s because of that image his life is saved as he’s transported 50,000 years back into the past and to a Mars unlike any he’s ever dreamed of.
It’s all here; flashing swords against ancient super science.  Hideous beasts and their even more hideous masters.  Noble warriors battling against grotesque humanoid creatures of astounding cruelty.  Captures.  Chases.  Escapes.  Fates worse than death.  And romance.  Garvey Dire finds it all on ancient Mars.
But what really makes DIRE PLANET a cut above other Burroughs inspired Sword and Planet stories is the political element.  Once Garvey gets hurtled back to ancient Mars, Joel doesn’t forget the U.S./China conflict and indeed, the way he cuts back and forth between the two time periods is in true Burroughs tradition as he was expert at juggling two sets of characters, leaving one set in a nail-biting cliffhanger at the end of a chapter then bouncing over to the other set of characters for a chapter then leaving them in a inescapable trap then going back and-
Well, you get the idea.  It’s a good technique that never failed to work for Burroughs because it’s a surefire way of keeping the story going.  Joel even manages to resolve the conflicts in both time periods in a manner that while it’s clever it also involved just a little too much bouncing back and forth through time for my taste.  Not that I’m opposed to time travel, mind you.  But I think that Joel figured that the only way out was to pinball various characters back and forth between the two time periods.  It’s a little bit dizzying but hey, if you’ve hung on with Garvey Dire all that way, you’re going to go on to the end and you won’t be disappointed.
I can’t finish this review without mentioning two of my favorite bits in the book; Number one is the revelation of who The President of The United States. And number two is that Joel apparently is psychic because he predicted one of the most popular devices in use today way back in 2005 when this book was first published.
So should you read DIRE PLANET?  You certainly should.  If you’ve never read anything by Joel Jenkins this is the perfect place to start.  Joel has been writing what we’re now calling New Pulp as long as I’ve known him and we’re talking roughly around 15 years.  And in all that time he’s built up quite the respectable amount of work.  DIRE PLANET is one of his best.
For more information about Joel Jenkins please visit:
The Vaults of Caladrex  http://www.joeljenkins.com/
Pulpwork Press   http://www.pulpwork.com/
Share