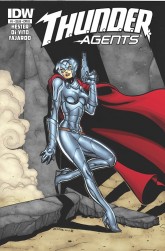 After the well-done but under-appreciated take DC Comics did on the classic heroes from Tower Comics, I was pleased, but rather surprised that a new company had secured the rights to them so quickly.  Even more pleased that it was IDW, who’s been tearing up the landscape with both exemplary and licensed titles.

The new title does the one thing I suspected they’d have to do – they started over.  It takes place in a new history, where NoMan and Lightning are in action, but no other members.  There’s experimentation going on in the background of issue 1 for the technology for the Undersea Agent, and dozens of candidates have tried and failed to wear the Thunderbelt.  Kate “Kitten” Kane is in charge of T.H.U.N.D.E.R., and while Guy Gilbert’s name is mentioned, it’s not explicitly said that he’s using the Lightning metabolism accelerator suit. And yes, T.H.U.N.D.E.R-fen, Weed is back, although apparently in a desktop capacity.

While I mourn the loss of all those classic stories, Phil Hester has a strong grasp of the characters and sets things up well for new readers, without resorting to excessive narrative to fill in the history. Andrea DiVito’s art is clean, with sparse backgrounds, and perhaps a bit too heavy a line in the inking.

The advantage of not being tied to years of past continuity is it makes it easier for new readers to jump on board, and the first issue hits the ground running, in the middle of an adventure.  You get the impression that there’s a history to the organization, but not one you need to know all about to enjoy. The majority of the issue deals with the scouting and recruitment of Len Brown, now a nearly-was goon for the NHL, now semi-drifter who picks up odd jobs, including the occasional leg-breaking deal for loan sharks.  His capacity for tolerating pain is off the charts, which makes him a perfect candidate for Professor Jennings’ Thunderbelt – in this incarnation, the belt causes intense pain to wearer during its use, hence the long line of guinea pigs with massive nerve damage.  He’s hastily sent in to combat the Iron Maiden, who has taken over a secret T.H.U.N.D.E.R base in the middle east.  The Iron Maiden appears to be working for the Subterraneans, and the next issue looks like it will parallel Rusty and Dynamo’s first battle.

Comic book movie super-producer Michael Uslan (and comic book writer) once again makes the credit box, with the mysterious byline “T.H.U.N.D.E.R Agents Project initiated By”, the exact credit he received in the DC run.  In a past interview, he made it clear that he’s as big a fan of the Agents as…well, me, and as part of the undisclosed deal he’s made concerning the characters, he has the movie rights.  So far he’s gotten two very good teams to bring the heroes to a new audience – I’m hoping this one all the success I wished the last one, and more.