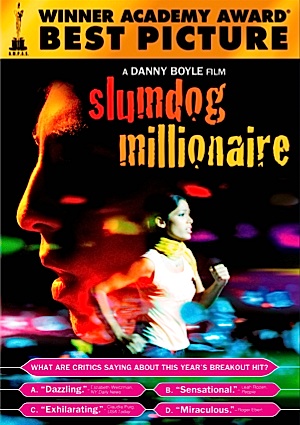 Pop culture is influenced by so many different factors and timing determines what will catch on and endure while other things, quality be damned, wither and die.  A perfect example is the Award-Winning darling of 2008, Slumdog Millionaire

Based on the 2005 novel by Q & A by Indian author and diplomat Vikas Swarup, it was optioned for film by British production companies Celador Films and Film4 Productions who hired Simon Beaufoy to adapt it. By the time director Danny Boyle read the script and accepted the assignment, it was 2006. The budget was set at $15 million, meaning the producers needed a partner – enter Warner Independent which gambled $5 million for the right. Shooting began in November 2007 and it spent much of 2008 being screened at festivals starting with Telluride and the Toronto International.  But, a Warner Bros. exec saw the finished product and felt that once you added in prints and marketing, it was not likely to recoup its costs.

A different exec at 20th Century-Fox saw it but saw something different and bought the film from Warners and scheduled it for late in the year. By the time it opened on November 12, the economy tanked and people were in a mixed state of financial panic and political euphoria.  People wanted something to latch on to, something to make them forget the scary real world, at least for two hours.

[[[Slumdog Millionaire]]] was the perfect antidote for what was ailing our psyche. As a result, it has earned, through this past weekend, worldwide revenues of $268,103,477 making it hugely profitable and turning the stars Dev Patel and Freida Pinto into celebrities. Pretty heady stuff.

The movie, coming out on DVD Tuesday, is incredibly moving, exciting, funny, poignant and very predictable. While it was the Feel Good Movie of the Year and therefore swayed voters into giving it many prizes, it is not the greatest film of the year.  In addition to the enjoyable story, it also shined a documentary-style eye on India’s slum life and we watched in gaping fascination. This was not Bollywood or some idealized view of life, but the actual way the majority of the people lived in the heavily populated country. This, more than the story, may be one reason it was so well-received around the world.

As for the story, a boy who grew up in the slums, managed to win a spot on the country’s version of [[[Who Wants to be a Millionaire?]]] After winning the grand prize, he is accused of cheating and subjected to police interrogation. His story of how he knew the answers allow for flashbacks showing how his education entirely came from the streets.  We also discover he’s risked all for the love of a girl, one he has not seen in years. It’s also the rise and fall of two brothers and the choices each made. In the end we know how this will play out and it does with a typical Hollywood happy ending, complete with Bollywood style dance number for the end credits.

It’s shot wonderfully by Boyle, who has previously trained his eye on Scotland in [[[Trainspotting]]] and on rotting flesh in [[[28 Days Later]]]. He’s aided by Indian director co-directed Loveleen Tandan who is woefully absent from the disc’s extras. Together they coax nice performances from the children and teens that play the three pivotal characters until they age into Patel, Pinto, and Madhur Mittal.  Some of the best moments in the film, though, come from the game of cat and mouse played between Patel and Anil Kapoor, who plays the game show host. Kapoor, a major star in India, needed a little convincing to play a bad guy but does it with oily charm.

The DVD disc comes complete with a dozen deleted scenes and most were trimmed for good reason, especially one that overplays Kapoor’s motivation. Some of the others are extended versions of scenes in the final cut and shows what good editing can bring to a movie. There’s also “Slumdog Dreams: Danny Boyle & The Making of [[[Slumdog Millionaire]]] ” which is a fairly typical piece despite the wondrous locations. There are two tracks of somewhat engaging commentary from Boyle & Patel and Producer Christian Colson & Beaufoy. Rounding out the standard DVD is a music video. The Blu-ray, not reviewed, contains a digital copy of the film, plus additional features including an Indian short film, another music video and From Script to Screen.

The movie is worth seeing and will bring a smile to your face during repeated viewings but will it be an enduring pop culture phenomenon or be a cultural oddity from 2008? Time will tell.