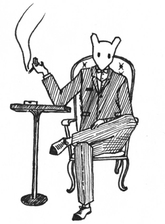 There was a time when it was assumed that people who read comics were not very smart. They couldn’t understand a book without pictures, despite the opinion of Lewis Carroll, as expressed by Alice. This opinion began to lose ground in the 1970s, and by the 1980s, when Art Spiegelman published Maus, some people began to think that comics were for people who were too smart.

During my time at DC, I saw a parallel development among schoolteachers and librarians. When we first start displaying our wares at book shows, we initially faced skepticism. As comics stories like “The Death of Superman” made the news, and more serious work, like Sandman, got reviewed in mainstream media, these professionals began to understand how graphic story could get students and library patrons excited about reading.

For the most part, comics have played only minor roles in classrooms. The excellent “For Beginners” series has covered about a bazillion topics. This September, NBM gets into the act with an American edition of a Dutch book, Science: A Discovery in Comics by Margreet de Heer. It is available in paper and pixel.

I could use a book that would explain science for the not-so-smart types I described above in the first paragraph. I’m terrible at memorizing the periodic tables, and if I start to think about time and how to define it, I get dizzy. Alas, this book does not fix my head.

It does something better.

deHeer traces the history of science from the ancient Egyptians to Richard Dawkins and beyond. She covers all the sciences: biology, geology, physics, astronomy, chemistry and so on. She describes scientific inquiry from the time that science was as hunch-based as religion (when it was assumed there were four elements, and the earth was the center of the universe) until now. Not only does she cite the times when scientists proved each other right, but also the times when they proved each other wrong.

She does this with charming drawings, with two characters who walk through the millennia, and interact not just with historical science, but with the people affected by their discoveries. It deftly shows that there is more to history than a list of kings and battles.

A lot of fundamentalist types, especially creationists, like to point at the errors other scientists have found in the work of Darwin, and claim that since his original theory of evolution was flawed, that means God created the world in six days a few thousand years ago. That’s not how science works. Real scientists never take “Yes” for an answer. They always seek to disprove an old theory, or prove a new one. When science proves something is false, it is as much a vindication for the scientific method as proving something is true.

If you have a curious kid in your household, you could do worse than get her this book. Even if that kid is 60 years old.