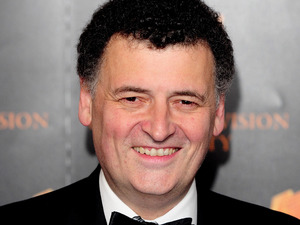 It’s a bit like the tale of the blind men and the elephant. An interview with Steven Moffat at the AdLib Comedy event in Edinburgh covered a plethora of topics on Doctor Who, and even one or two about Sherlock. And each response got its own headline in different corners on the Internet.

Some trumpeted that after an extended period of campaigning, Moffat has acknowledged the desire of Hobbit director Peter Jackson to helm an episode of the series. Jackson has famously claimed that he’d do the work for free, accepting only a Dalek as payment. “So we’ll give him a Dalek and he’ll direct an episode,” the showrunner said, going so far as to say that doing the episode in Jackson’s native New Zealand was “entirely possible.” Not exactly an official announcement, but quite a tantalizing maybe.

Some seized on his non-confirmational response when he was asked about whether or not JK Rowling was writing a story for the Doctor’s 50th anniversary event. His reply was a wry ” I can’t confirm that…right now.” Neil Gaiman was also rumored to be taking part in the anniversary story series, but as there’s only a couple more Doctors left, time seems to be running out for both to take part.

Steven also touched on a number of points concerning the continuity of the show as well. He absolutely closed the door on a return of the Time Lords, declaring them “dead in my mind. They died.” He also verified that the 12-regeneration limit is still in action, suggesting we’ll see it play a role very soon on the show. Depending on how John Hurt’s mysterious “other Doctor” is explained (or explained away), Peter Capaldi may well be playing a Doctor after his 12th, and normally last, regeneration.

While No More Time lords also means no return for Time Lady Romana, it does not shut the door on “The Doctor’s Daughter” Jenny, from the episode of the same name. He said that door was still open.

After so many Scots on the show, including two Doctors (McCoy and Tennant) some cheered the news that Peter Capaldi may well be keeping his Scottish accent when playing the Time Lord. “I’d be very surprised if he didn’t”, said Moffat, which isn’t quite a yes, but pretty damn close.

When asked about Sherlock’s survival, he made it clear that like Douglas Adams’ explanation of how to fly, it all comes down to how Sherlock avoided the ground. “He’s got to interrupt his fall before he hits the pavement”

More than anything else, two points must be kept in mind concerning all of these news tidbits.

One, the event was dedicated to comedy and wit, and it’s entirely possible that Steven was being flippant and glib in the spirit of the evening, and his comments must be taken as at least potentially tongue-in-cheek.

Two, and far more important…The Moffat Lies! He’s already said he’s been “Lying through his teeth” over the details of the anniversary special, likely in a vain and desperate desire to keep some surprises for the viewing public.  He’s not above simply making something up to get a response.