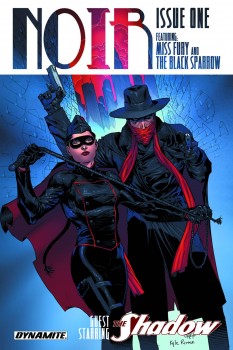 New Pulp Publisher Dynamite Entertainment has announced Noir, a new comic book series featuring The Shadow, Miss Fury, and The Black Sparrow. NOIR #1 is written by Victor Gischler with art by Andrea Mutti and a cover by Ardian Syaf. Noir #1 will arrive in comic book shop on November 13th.

Prelude to Miss Fury! When thieves steal from other thieves it always causes problems, doesn’t it?  So when The Black Sparrow is hired to steal a mysterious “Moon Stone” from a museum in New York, her decision to keep the thing for a better payday annoys her former employers who then steal it back from her.  Now it’s The Black Sparrow who is annoyed, and that’s a dangerous thing.  All she wants is what she stole fair and square, but she needs help.  She needs The Shadow!