John Ostrander on… The Substitute! 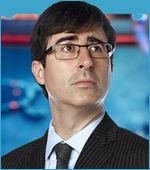 On June 10th of this year, Jon Stewart took leave of his job hosting The Daily Show on Comedy Central to go direct his first film, handing the hosting duties over to John Oliver, one of the show’s top “reporters.” This was a big deal to me – I’m a huge fan of the show but Oliver has never been my favorite performer on it. He’s been a little too over-the-top manic, playing at a character rather than being the character as predecessors like Ed Helms, Rob Corddry, Steve Carell and Stephen Colbert have done. Or Samantha Bee who comes off as a genuine lunatic (and I mean that as the highest compliment). I thought he was trying too hard to be funny rather than being funny.

Someone I would have picked over Oliver was Larry Wilmore – the dry and droll “Senior Black Correspondent.” I saw him doing a documentary about African-Americans and the Mormon Church in a Showtime special titled Race, Religion and Sex. His interviews were first-rate. I was somewhat disappointed they didn’t pick him to sub for Stewart.

I was also concerned that The Daily Show itself would suffer. Stewart has been so identified with it, rarely taking a night off even when obviously physically ill. There was simply no one else to do the job. Until now.

So, the summer wanes and Labor Day approaches and with it Stewart’s return to the desk of The Daily Show. How’s it gone without him?

In my view, surprisingly well. Oh, no question that I will be glad to see Stewart’s return but John Oliver has, overall, done a very good job. I get a better sense of Oliver as a person in his work as anchor for the show. He’s also been willing to play the straight man for the gang of comedic lunatics that comprise the show’s “reporters.” He’s been an adept interviewer, which is important because the interview sessions comprise about a third of the show. Stewart is still the better interviewer but Oliver is better than David Letterman. And he’s getting better.

An early criticism I had for Oliver’s anchorman duties was that he appeared to be imitating Stewart’s intonations and gestures and even posture. Understandable – you go with what works and you don’t want to lose the audience (I’ll bet that is one of Oliver’s recurring nightmares; that he loses the audience for Stewart). It’s gotten less as the summer has gone on, however.

My larger concern was the show itself. Stewart’s not just the anchorman for the series; he’s a writer and co-executive-producer for the show. He has set the tone for The Daily Show, I think, and that’s important. It’s not only a satire of news programs in general but of the news itself and how it’s covered. There’s a sense of real moral outrage running through the show that gives it the edge it shows. There’s a point of view that is consistently presented.

The show is biased and that’s fine; those who say it should be more balanced forget that this is actually a comedy show and not an actual news show. They proudly proclaim themselves a “fake news” show. However, in 2009 the Pew Research Center for the People and the Press said that 21% of people between 18 and 29 said that The Daily Show was their primary source for news. Stewart and producers of the show have discounted that and suggested those who used the show as their only news source would wind up horribly misinformed.

My concern was, what would the show look and sound like without Stewart, no matter who was in the anchorman’s chair? I’m happy to say it still has the same voice, the same values, the same moral outrage underlying it.

That bodes well for the show’s future. I’m glad Stewart is coming back but, let’s face it, at some point he will leave and not come back. He may want to direct some more (depending on how this first film goes), he may get offered a gig on a broadcast network late night show, he may just get tired and want to do something else. This summer has proven The Daily Show can go on without him.

It will also give him a viable substitute on the nights when he’s too ill to perform or needs to be elsewhere. That’s a good thing; it will help keep Stewart from burning out. Will the sub/heir apparent be John Oliver? It depends; Oliver’s gotten a lot more visibility and credibility as a result of this summer’s experiment. I‘d be surprised if he doesn’t get more offers as well.

So let’s call the experiment a success – John Oliver showed he can do the job and welcome back Jon Stewart. Just don’t go away again too soon, okay, fellah?