Still Not Ginger – Peter Capaldi is the New Doctor 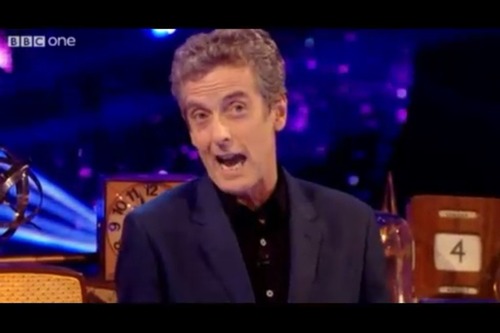 Announced at the climax of a globally-broadcast special, The BBC introduced the twelfth actor to play The Doctor, Peter Capaldi.

He’s a BAFTA-winning actor, winning for the role of Malcolm Tucker in The Thick of It.  He’s appeared twice on Who-related series, he played Caecilius in The Fires of Pompeii, and John Frobisher in Torchwood: Children of Earth.  In Neil Gaiman’s Neverwhere, he played the angel Islington.  He is currently filming the BBC adaptation of the Three Musketeers, in which he plays Cardinal Richelieu.

Showrunner Steven Moffat says he’d considered Capaldi when he was casting the eleventh Doctor, though he decided it wasn’t quite the time.

This wasn’t  his first time traveling in time, either – He played Doug Hatton in the recurring sketch “Drunk in Time” on The All new Alexei Sayle Show.

Peter most recently appeared in World War Z, playing a physician working with the World Health Organization.  Or, as he’s listed on the IMDB, “WHO Doctor“.

No details have been yet shared as to how much a part he will played in the final two episodes of the year. Though it’s traditional for the new Doctor to only appear in the last moments of the last episode, the Christmas episode has not been filmed, and David Tennant made his first full appearance in the first Christmas episode, “The Christmas Invasion”.

Mr. Capaldi’s movements will likely be closely followed, and any appearance he makes in the Christmas episode will likely be widely reported.  The Management awaits his work with extreme interest.