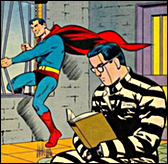 A week or so ago I was talking about how in the Man of Steel movie they had Superman kill someone. No spoiler alert: if you haven’t seen the movie yet, it’s your own damn fault. It did violate one of the traditional tenets that marked Superman as Superman – he doesn’t kill. Lots of innocent bystanders must have also died during his battle with Kryptonians in Smallville and Metropolis but hey – collateral damage.

I did note, however, that characters that have been around a lot need an updating to keep them relevant to the times in which they are being read/watched. The question to me is – how much change is acceptable before you’ve altered the character so much that they are no longer really that character. What defines each character? What are the essentials?

I read in a recent Entertainment Weekly that Andrew Garfield, the current movie Peter Parker/Spider-Man, suggested that the next Mary Jane actually be a guy. Have Peter explore his sexuality with a guy. Even the director, Marc Webb, when asked if he had heard Garfield’s idea, seemed to do an eye roll.

That idea certainly isn’t traditional Peter Parker and got some discussion, but is it that far off? I’m not saying I endorse the idea but wouldn’t it make Peter more contemporary, something to which younger readers/viewers might relate? Would a bi-sexual Peter Parker be any less Spider-Man? Would a Peter Parker in a lip lock with a guy be more shocking than a Superman who kills?

The comics’ Spider-Man has taken it further. In the book, Spider-Man’s old foe Doctor Octopus has taken over Peter’s body and life and identity of Spider-Man with Peter looking real dead and gone. Otto Octavius is now Spider-Man. WTF?

The powers are the same, but the character sure isn’t. Is it the powers that define who Spider-Man is or is it the man behind the mask? If the latter, is this really Spider-Man?

This isn’t the only character to which this has happened. Iron Man has had people other than Tony Stark in the armor. Batman has had a couple of people under the cowl. And let’s not start on Robin. Or Batgirl.

The stories of Sherlock Holmes have also lent themselves to numerous interpretations. There are currently two TV series that put Holmes into modern day. I only really know the BBC series, Sherlock, but despite changing the era it feels so Holmesian to me. It feels like they got the essentials right.

I did it myself with my own character GrimJack. First I killed off the main character, John Gaunt, then I brought his soul back into a clone of himself and then, eventually, I had him reborn into another person, James Edgar Twilley, although again, it was the same soul. Munden’s Bar remained but the supporting cast was different and I had bounced the whole thing down the time line a hundred years or so and the setting of Cynosure was also changed.

I knew why I did it at the time. I felt my writing was getting stale and the character was as well. We hadn’t been around all that long but I felt we were getting tripped up on our own continuity. Sales were eroding. My editor asked me to come up with some way of making the book dangerous again.  That’s how I chose to do it.

Was it still GrimJack? Yes, I felt it was – in its essentials. An alienated and violent loner in a strange city living by his own code. Same soul, two lives. It still felt like GrimJack.

I’m willing to bet that most re-examinations of a given character or concept stems from that – to look at it all with fresh eyes, to make the reader/viewer do the same. To me, that’s trying to get to the essentials.

Maybe we aren’t all agreed as to what the essentials are in any given character or concept. That may vary from person o person, fan to fan. I think that’s why there are quibbles right now about Man of Steel; if Superman not killing is essential to the character, there’s a problem with the newest version. On the other hand, if “do not kill” rule is just like wearing red trunks, then it’s not essential. Is the Man of Steel Superman?

That comes down to you.