Mike Gold: Beware The Batman – I Call Him Sid 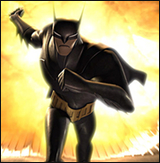 O.K. I’ll admit it upfront. I was kind of wrong. I was all prepared to hate Beware The Batman, the new DC Nation animated series.

There are a whole lot of reasons for this. First, I like my Batman to have a forehead. Second, the teevee bastards cancelled Young Justice, which I really enjoyed. So did my adult daughter and, from time to time, either or both of our cats. It was a family experience. Third, the CG is clunky and lame, lacking the grace of the Green Lantern series. Fourth, Lt. James Gordon is as big as the Incredible Hulk and almost as old as dirt. If he didn’t make captain before he got Reed Richards’ hair, he’d counting the days to his pension.

Next-to-last, do we really need a fourth Batman animated series? They did it right the first time, they did it wrong the second time, and the third one was surprisingly entertaining. How many times can you go to the well before you hire Jim Carrey and Arnold Schwarzenegger?

But, most of all, head over heals of all, what they did to Alfred Pennyworth shouldn’t have been done to… oh, say… the Joker. He’s an entirely different character. A military super-Seal MI-6 type, roughly fourteen feet tall, no mustache – indeed, no hair at all, and a chin so pronounced he looks like the illegitimate son of Jay Leno and Bruce Campbell. Simply put, he’s not Alfred. I would have been happier if they called him Sid.

But I dutifully had my TiVo watch the first three episodes and I sat down to watch the first. Maybe it was a case of diminished expectations, but I mostly sorta liked Beware The Batman. I found myself going from the first to the second to the third, and then setting up a season pass for the rest.

Once I got past the stuff about Sid calling himself Alfred, the writing is quite good. Paring Katana with Bats as a de facto Robin works. The whole Task Force Batman thing (my phrase, not theirs) works better here than in the comics. They decided to focus on underused villains that have been mostly unused on television, which is a very smart move. In fact, I’m in favor of any Batman series that doesn’t feature the Joker in the early weeks. Make ‘em work for it. The relationship between Sid and Bruce is solid and convincing, and Bruce doesn’t come off as a douchebag.

As is true with virtually all Warner Bros. projects, the voice work is impeccable. Yes, I miss Kevin Conroy in the lead – he’s had the job longer than any single Batman actor, and that includes Matt Crowley (Google, chillun). But as always, voice casting director Andrea Romano rules.

None of this makes up for what they’re calling Alfred and I call Sid. This is an abomination – but not quite a dealkiller. For a while, in the comics they established Alfred was involved in the World War II French freedom fighter movement with Mlle. Marie, and that worked for me because he was still Alfred – reasonably athletic, extremely clever, and highly effective. They got past this when his World War II service would have defined him as older than Methuselah.

When all is said and done, Beware The Batman is an entertaining show.

But when I watch it, I still think “Oh. You mean Sid.”