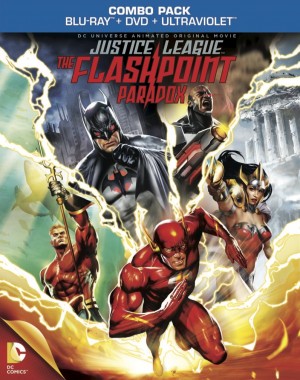 The larger and more sweeping the cosmic event, the more the audience needs a character to act as the anchor. This was a lesson Marv Wolfman learned while writing the first such event, Crisis on Infinite Earths. Years later, when he was afforded the opportunity to novelize it, he focused on The Flash as his focal point. Similarly, Geoff Johns built the entire Flashpoint miniseries around Barry Allen and used it to upend the DC Universe and set the stage for the new 52.

While the miniseries was a beautifully drawn, sprawling mess that made little sense whatsoever, the animated adaptation does a better job honing the story and its spinoffs into a tighter, more focused tale. It still doesn’t make a whole heck of a lot of sense but it’s entertaining to watch. Justice League: The Flashpoint Paradox is now out on Blu-ray from Warner Home Video and it’s a strong entry in the line. 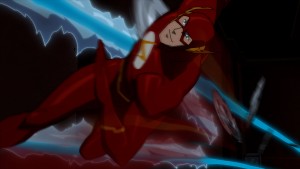 Essentially, the Flash, despite knowing better, goes back in time to prevent his mother’s death, an inexplicable decision exacerbated by his 25th century foe, Eobard Thawne, t

he Reverse Flash. Thawne channels the speed force, which they both access, to create some sort of time distorting “speed boom” that totally alters the DC Universe. As a result, Allen awakes up in a world where Mom is happily alive but not for long as Atlantis and Themyscira are waging a war that threatens to shatter the planet. He also no longer has his powers.

Among the “subtle” alterations is that Kal-El’s rocket misses Kansas and is captured by the U.S. government; Thomas Wayne survives but Bruce is shot by Joe Chill; the wizard Shazam shares his power with multiple kids, and Steve Trevor never arrived on Paradise Island, a.k.a. Themyscira. There are others but it’s a dark, depressing place to live when you have the unrepentant Len Snart running around as the beloved Citizen Cold. 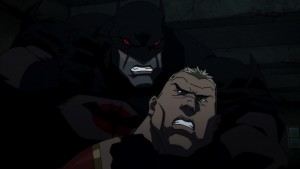 While focusing on the core JL characters, plus Cyborg for those needing affirmative action, it totally ignores the heroes and champions of bygone eras (except for some version of Sandman), most of whom would gladly come out of retirement to prevent the war from happening. Occult beings such as the Spectre or Dr. Fate certainly would have intervened. And then we have Grifter, who was never a part of the DCU here  so it’s a mess.

Allen convinces the alcoholic Dark Knight to help him regain his speed and then they race to stop global Armageddon, allying themselves with an odd assortment of other metahumans. They also rescue the Kryptonian from custody and he miraculously demonstrates all his powers within hours of exposure to the sun although it took him years in the other reality to develop them and just as long to master them. 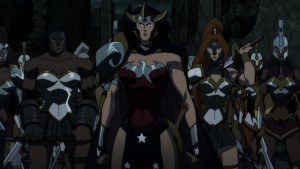 But things zip along at such a dizzying pace, you just watch. Director Jay Oliva has a sure hand with the film, as he has in the last handful of outings. He’s saddled, though, with fairly unattractive character designs that once more over emphasize the upper half of the male bodies and give everyone pointy chins. Jim Krieg, another Warner animation vet, does a nice job making the necessary modifications to contain the story in 81 minutes. A few too many characters show up and don’t do anything but it’s nice to see them.

The miniseries worked as a transition by establishing the DC, Vertigo and WidlStorm universes as three parallel worlds (out of 52 known parallel universes) being brought together into a New DC Universe. The only real hint that the reformed timeline at the film’s end is the modified Flash costume Allen wears. Otherwise, it all seems the same but do watch the film through to the end of the credits for a 10 second hint of the following film, the first to resemble the New 52. 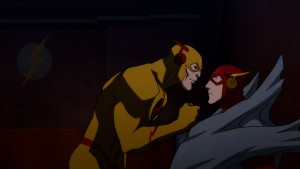 The disc comes with the usual assortment of supplemental features. You get audio commentary from  Producer James Tucker, director Olivia, screenwriter Krieg and Johns as they chat about adapting the comics to film although there’s little new revealed here.

Rather than provided newcomers with a primer as to what this is all about, you get “A Flash in Time: Time Travel in the Flash Universe” (22 minutes) as The Hero’s Journey author Phil Cousineau provides more historic perspective than the others do for the comics that influenced the miniseries. Cousineau takes himself too seriously and the source material underexplained. Then there’s  “My Favorite Villain! The Flash Bad Guys” (19 minutes) as Cousineau, Krieg, Johns and current Flash writer Brian Buccellato discuss some of the colorful foes making up the legendary Flash Rogues’ Gallery. For Blu-ray viewers, there are Flash-centric episodes from

Justice League and Batman: The Brave and the Bold. Finally, there’s a Sneak Peak at Justice League: War (8 minutes) and Flashpoint #1 Digital Comic Excerpt (a mere 8 pages in the hopes you go out and buy the graphic novel).