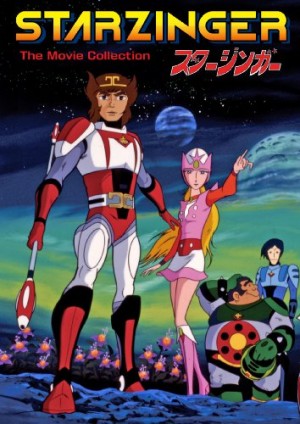 Without realizing it, I grew up exposed to the earliest anime, shows like Astro Boy and The Amazing Three and Kimba the White Lion. It was a quiet invasion overshadowed by louder, more colorful and kinetic American animation on Saturday mornings and classic Warner cartoons on weekday afternoons. As a result, I missed the next great era of American anime such as Space Battleship Yamato and Robotech. It certainly developed a large following in the 1970s and 1980s with the airwaves packed with these shows. In fact there were so many that several shorter-run series were packed together as Force Five. The Wednesday show was known as Spaceketeers and ran for 26 episodes, edited down from 73 episodes and never quite concluded the story.

Now, Shout! Factory has taken the series, which was edited into three different films by Toei in 2009 and is releasing them on disc. The new version was written and directed by William Winckler, no stranger to adapting anime for American audiences given his earlier work on Tekkaman. Starzinger the Movie Collection is 326 minutes of an earlier era of anime and definitely has its fans. Sadly, I’m not among them.

Princess Aurora is a young human surrounded by a trio of cyborgs en route to the Great King planet to restore the Galaxy Energy. Apparently, the Great King’s aging Queen is causing this disruption throughout the universe and balance needs to be restored or life as we know it comes to an end.

The series is based on a serial that first ran in Terebi Magazine with art by Gosaku Ohta, but gained far greater notoriety in animated form (which ran in 1978-1979) thanks to the work done by Leiji Matsumoto, best known for his Captain Harlock work. In both cases, the story is a science fiction updating of a Ming Dynasty story, Journey to the West with Sun Wukong, the Monkey King, now a naïve, teenaged girl.

The original 16th century antecedents were further twisted out of shape when the Japanese was translated into English and the brutal editing shifted the story to that of a mission to the Dekos Star System to stop peaceful beings from being turned into evil mutated lifeforms. A good portion of the story shows Jan Kugo, Sir Djorgo, and Don Hakka, think the Three Musketeers (Spaceketeers, get it?), protecting the Princess during the 30,000 lightyear journey to the source of corruption.

If any of this sounds familiar, it’s because the classic Chinese tale also served as inspiration for Dragon Ball and Saiyuki among others. By taking the core story and using elements in each of the three parts, this structurally works as a trilogy and the voice cast — Paul Oberle (Zombrex: Dead Rising Sun), Kyle Rea (The Mythical Detective Loki), and Chase Masterson (Star Trek: Deep Space Nine) as Queen Lacet – do a serviceable job.

While the actual animation and design work is fine, it’s also not terribly imaginative nor do the episodes really do anything with the characters so there is little growth over the journey or depth to the characters. If you’re not a diehard anime fan, this grows tedious very quickly.  Still, for those who worship Matsumoto’s work, this becomes a must see production.