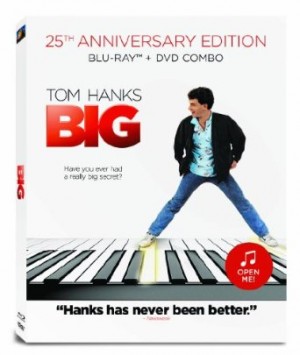 It’s what Josh Baskin and MacMillan play during the memorable dance scene in 1988’s Big but it’s also what the film is infused with, making it stand up to the test of time. Yeah, its look is dated thanks to bad hair and big shoulder pads, but the story of a 13 year old’s wish to become an adult endures.

20th Century Home Entertainment has released Big 25th Anniversary Edition this week, in time for last minute stocking stuffers. It belongs under every tree because it’s just so well crafted, explaining how Tom Hanks earned an Oscar nomination for his performance. His work stems from the Academy Award nominated script by Gary Ross and Annie Spielberg. 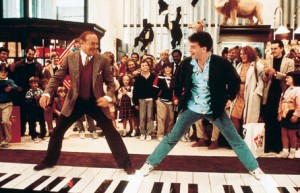 Frustrated at being small for his age and unable to achieve his modest goals, Josh (David Moscow) makes a wish at the local carnival. The unplugged Zoltar fortune telling machine grants his wish in a nice touch of magical realism and then we’re off. Josh (Hanks) wakes up as a 30 year old complete with stubble. He panics after discovering the carnival has packed up and left, and goes on to terrify his mother (Mercedes Ruehl), who believes the man an intruder. Thankfully, his best friend Billy (Jared Rushton) accepts his crazy explanation and uses his savvy to help him navigate an adult world.

When the two learn it’ll take six weeks to receive details on carnivals in the state, it’s clear Josh needs a job so he can survive on his own. Fortune leads him to a computer job at MacMillan Toys where his unique perspective rockets him up the corporate ladder, much to the consternation of Paul Davenport (John Heard), confusion of Susan Lawrence (Elizabeth Perkins), and fascination of MacMillan (Robert Loggia). Of particular interest is Josh’s pitch for an interactive comic book way before graphic novels and digital comics were tangible parts of our world. 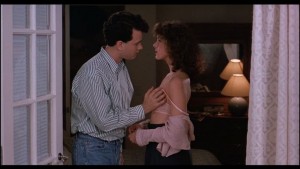 Director Penny Marshall brought a light touch to the film, encouraging improvisation from her cast, and a keen eye on treading the line between drama, comedy, and slapstick. She unleashes Hanks, who excels in several set pieces beyond the immortal dance bit such as the office party where he demolishes the appetizer table or gently caresses a woman for the first time. Her casting was pitch perfect, allowing the film to be alternatively sharp and warm.

The film comes nicely packaged with a Blu-ray and DVD, along with sound chip playing “Heart & Soul” and Zoltar cards for personal wishes. The Blu-ray offers you the 1988 theatrical release (104 minutes) along with the extended cut (130 minutes) which was first released in 2007. The deleted scenes are reinserted for the longer version and it’s not appreciably better. If you prefer the original, the ten deleted scenes are included as an extra, with five intros by Marshall. 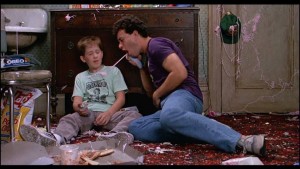 Ported over from the 2007 release are several features including the audio documentary by Ross and Spielberg and the Carnival Party Newswrap. New is the Big Beginnings where Marshall, producer James L. Brooks, Ross, Spielberg, Perkins, Loggia, Perkins, and Rushton discuss the film’s origins. Interesting to note is that even though they had the body switching notion first, mounting the production took so long that other stories, now easily forgotten, hit the screens first making everyone nervous about its reception. Chemistry of a Classic further breaks down elements of the film, including behind the scenes footage of key scenes. The Work of Play is a nice companion feature looking at the real world of toy manufacturers and how closely Big captured the goings on. Finally, the syndicated Hollywood Backstory episode on Big is included.