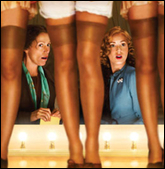 There are certain films I’ve discovered just by channel surfing; likewise, there are films that I know and when I come across them (again, channel surfing), I may stay to watch a given scene and then find myself watching the film through to the end. Most of the OT Star Wars movies are like that; so is Casablanca. This morning my Mary and I came across another, Miss Pettgrew Lives For A Day.  I found it first on TV, bought a copy, and today watched the movie through to the end anyway.

The 2008 film stars Amy Adams, Frances McDormand, Ciaran Hinds, Lee Pace, Mark Strong and Shirley Henderson, among others, and it was directed by Bharat Nalluri with a screenplay by David Magee and Simon Beaufoy adapting the 1937 novel by Winifred Watson.

I suspect you’ll already know Amy Adams’ and Frances McDormand’s work. Bharat Nalluri may be more known to ComicMix readers as the man who directed episodes of MI-5 and Torchwood: Miracle Day. Writer David Magee wrote Finding Neverland (another film I love) and Life of Pi. Simon Beaufoy won an Academy Award for Slumdog Millionaire and has also scripted the upcoming The Hunger Games: Catching Fire as well as The Full Monty.

Ciaran Hinds has a mixture of films to his credit. He played Dumbledore’s brother in the final Harry Potter film, was also in Tinker Tailor Soldier Spy as well as John Carter and Game of Thrones. I thought he was very hammy in Political Animals, the Sigourney Weaver TV miniseries but he’s wonderful and understated in Miss Pettigrew.

Mark Strong was in Tinker Tailor Soldier Spy and John Carter as well and also played Sinestro in the Green Lantern film as well as Lord Blackwood in the Sherlock Holmes film with Robert Downey Jr. Lee Pace is in all three Hobbit movies and will be playing Ronan the Accuser in the upcoming Guardians of the Galaxy film.

Why do I tell you all this? To drive home that Miss Pettigrew has a really good pedigree and it lives up to it.

The story is gossamer light for all that it’s set in London in 1938 on the eve of World War II. That gives the film an underlying shadow; we know what’s waiting in the wings. So do some of the characters and it adds a poignancy to the story.

The story? Imdb does a nice job of summarizing the story so I’ll quote it: “War threatens London as Miss Pettigrew, a destitute governess, filches a client’s card from her agency and presents herself at the door. A singer named Delysia Lafosse wants a social secretary as she seeks a West End role by sleeping with a feckless producer in the bed of Nick, a smarmy nightclub owner with whom she also dallies. She ignores Michael, her piano player, who loves her and has tickets for New York on the Queen Mary. Miss Pettigrew’s job is to make sure Delysia gets the part. Over 24 hours, Miss Pettigrew is also called upon to help an ambitious and unfaithful fashion editor patch things up with her older fiancé, a lingerie designer. Has Miss Pettigrew found her calling?”

Amy Adams is Delysia and she’s perfection. She has superb comedic timing and shows real heart in a character that could otherwise be described as flighty and manipulative. The character is a fake but there are reasons why and a past that comes up at key moments. There’s an innocence to her. And it’s a brave performance. At the emotional climax, when she sings “If I Didn’t Care”, there are notes where Amy Adams shows us that Delysia is a good singer but not a great one. She’s not as good a singer as Amy Adams proved in Enchanted. You can hear that song on YouTube.

Listen to how the real character breaks through as she sings the song and discovers where her heart truly lies.

Frances McDomand’s performance as Miss Pettigrew is a lesson in underacting. The character starts very cold and distant, with a very set idea of what is right, and it all gets turned upside down as she encounters Delysia. Her heart, her warmth, opens up as she deals and helps the chaos that is the younger woman.

All the actors are wonderful and the movie itself could have been made in the 30s – all the period details seem so right. It’s a beautiful film to look at and the costumes and the cars and the sets all establish a reality – one that you know is soon to vanish. I never escape the underlying threat of war that runs through the film.

Just wanted to share a film that has become one of my favorites. Will you like it? Beats me. But if you’re a tad tired of superheroes right now and explosions and all that, you might want to give it a try.

TUESDAY MORNING (and so on): Emily S. Whitten