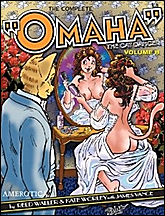 Has it really been more than 35 years since the debut of Omaha, the Cat Dancer? That’s why it says in the introduction to Volume 8, the last of the collected series, just published by Amerotica, an imprint of NBM.

Way, way back in those pre-Internet days we found our comics by happenstance. I was lucky enough to live in New York City, and had six or seven different comic book stores within a couple of miles of my apartment. If one store didn’t have a particular title, it was likely another store would. More to the point, it was possible for someone like me, an engaged but not maniacal fan, to find a book that was totally new to me. I hadn’t read any pre-publication hype. I might not have heard of the creative team. But I could stumble upon something, and it could bring me joy.

Such was the case with Omaha, the Cat Dancer. I can no longer remember when I read it first, but I know I was on-board from the beginning. The artwork was so graceful, the characters so credible, that I barely noticed that they were anthropomorphic animals.

Omaha was infamous in its day for its frank sexuality. The characters had sex, often, and not only as a variety of gender combinations, but species combinations as well. Dogs and cats, living together! When a Chicago comic book store, Friendly Frank’s, was busted for selling an issue in 1988, the Comic Book Legal Defense Fund was formed.

And yet. And yet. It’s hard to imagine a combination of explicit sex and character development that would be less gratuitous. The characters in Omaha have sex because they are complicated, adult characters who do things that complicated adults do. It’s part of their lives, just like sleeping, eating, going to work, taking a walk, or breathing.

There is also a fair amount of political activism in the lives of the characters. As citizens of Mipple City, they get involved in elections and zoning issues. It’s a refreshing flashback to a time when community involvement was something adults took for granted, like sex, meals, walks, etc.

Oh, I had my quibbles. I’ve never entirely bought into the perspective that strippers are agents of revolutionary change. I kept trying to figure out if the species of animal chosen for each character had any kind of racial or ethnic or class distinction. I found it awfully convenient that a lot of characters ended up being related to each other.

The new volume is the last, containing the issues that weren’t completed at the time of writer Kate Worley’s death (too soon) from cancer. Her husband, James Vance, completed her work along with Reed Waller, the artist on the series from the get-go. The transition, to me, is seamless.

There won’t be any more. That’s a shame. But we have these eight volumes, and you should get them. Now.