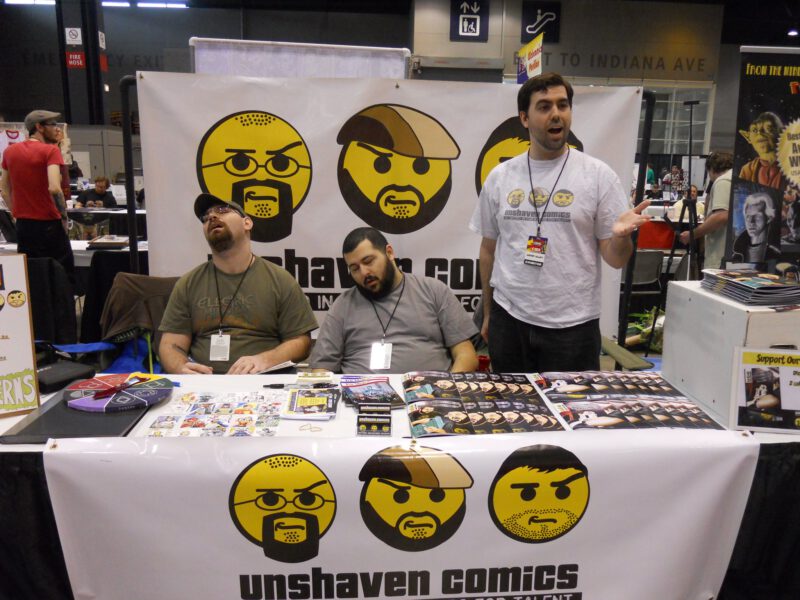 Hello all! I know it’s been a good long while since we chatted. Allow me back into your hearts, and I shall tell you a tale. Unshaven Comics, for those not-in-the-know, is the small independent publishing company I am co-owner of. Unshaven Comics is myself, and my two best friends, Matt Wright and Kyle Gnepper. We formed back in 2007 when we were commissioned to create our first published work… “The March: Crossing Bridges in America”. We released the book in 2008 at the Wizard World Chicago, and sold our butts off. One of our customers? Mike Gold. Yup, that Mike Gold. And soon thereafter… well, you see my name on this site from time to time, so you get the picture.

Let’s jump ahead a couple years, shall we? While we liked doing our debut book… we craved the world of fiction. Thus, we launched “Disposable Razors”… a 3 part anthology series that allowed we Unshaven Lads the opportunity to explore the genres we love. At C2E2 (That’s the Chicago Comics Entertainment Expo) last year, we debuted issue 1. Matt and I got married. No to each other. And then we got houses. Not next to each other, but close. And Kyle moved into his own pad not far away either. Life got in the way, but not enough to stop us from creating. This year, we were proud to start our 2011 convention circuit with issue 2. And here’s where our real story begins.

We’ve done a handful of ‘Artist Alley’ appearances in our short careers. With each successive year, we brought out a new product, and beat the year before in sales. With 2 issues on the table, and Matt fully equipped to rock out convention sketches, we took to C2E2 2011 with more pep than we’d ever had before. Something about having actual sequential issues just energized us. The show opened this past Friday, March 18th, to a steady stream of fans. Held at the McCormack West Building right off of downtown Chicago, the convention floor was buzzing more than it had the year before. With a literal “who’s-who” of comic pros, and a few of us young up-and-comers anchoring a large Artist Alley, there was a palpable excitement throughout the weekend. And as we had done every year previously, Unshaven Comics did everything it could to entertain the fans who walked past our little 8ft swatch of heaven.

We brought out custom made puppets. We sold a comic two pack with collectible stickers. Matt drew everything from an Orange Lantern Gollum to a naked Spider Jerusalem wearing only his trademark grimace and a censor-bar. Kyle took to the fans like a machine… greeting everyone within earshot, and offering them a chance to take a look at our book. And Friday breezed past us. The con floor closed, and we joined Mike and comic book legend John Ostrander for dinner. I’ll spare everyone the details, but suffice to say, it was one of those times that half of you attempts to be professional, while the other half does nerdy somersaults grasping at the fact that you’re breaking bread with industry veterans. We returned to the con floor Saturday, and did was we did best; sell comics and make fans one at a time. And we did the same on Sunday. When all was said and done, we’d sold out our stock of issue 1 and more than 2/3rds of our stock of issue 2. Several fans throughout the weekend even returned to our table to tell us how much they liked our book. Nothing made us smile more.

Each of Unshaven boys took a stroll across the con floor. We said hello to artists we’d befriended over the last few years at cons. We spent a bit of personal dough on nerdy prizes… prints from our favorite artists, action figures we desperately need to show off, and other sundry baubles our wives tolerate littering our offices. Hands were shook, fans were met, and books were sold. At the end of it all, we took stock of what we’d accomplished; We’d turned what used to be at best a fun hobby, into a viable professional endeavor. Don’t misread me, we all have day jobs still… but now, when we hang up our coats at home, we’re hard at work on Disposable Razors #3… set to debut this August at Wizard World Chicago!

For more details about our time at the show, and for some looks at Matt’s sketches… please visit our site, unshavencomics-online.com, and enjoy!