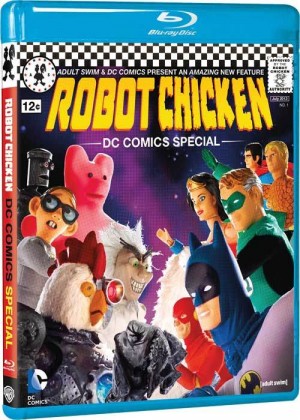 Robot Chicken has had some fun with the DC Universe ever since the series premiered on the Cartoon Network’s Adult Swim. As a result, a DC-centric special was inevitable and it aired back in the winter. Now out on DVD from Warner Home Video, the Robot Chicken DC Comics Special is a fast-paced laugh riot for comic book fans.

The RC crew, headed by cocreators Seth Green and Brecken Mayer are on hand, aided, abetted, and egged on by DC’s Chief Creative Officer Geoff Johns. Interestingly, Zeb Wells, who normally writes for Marvel, never for DC, is ion hand to direct the special. On the surface, they cleverly make this appealing to mainstream viewers by basing the look, feel, and sound to mimic the Super Friends animated series, using sound effects from other animated projects. But once the special gets underway, you glimpse tons of characters only comic readers would know, and that’s fun, because you don’t need to know the arcane details. Still, one of the funniest bits involves the foe Mr. Banjo, voiced by Alfred Molina, who admits it was his favorite part on the special.

The 23 minutes zip by, tied together by the usual ribbing Aquaman gets but this time, he gets so frustrated he turns to the Legion of Doom and offers his help in taking down the JLA. Another running gag, that never gets old, is the sudden arrival of Bane, who picks up Batman, breaks his back and departs.

Given how short the running time, it’s pretty impressive the disc comes with two hours’ worth of extras, notably funny writer commentaries and slightly less funny actor commentaries. There’s also The Making of Robot Chicken DC Comics Special that runs nearly as long as the show itself and gives you a good idea of what goes into making one of these episodes. There are some outtakes as the actors flub lines and deleted sketches, that get introduced and you learn why they didn’t make the cut. These, at least, got turned into animatics before being cut and one, the heroes needing the bathroom after eating Green Arrow’s chili, was borderline offensive while Booster Gold debating time traveling to kill Hitler with the JSA felt inappropriate (I guess you still shouldn’t make fun of the Holocaust).

Another extra takes you on an incomplete, mildly incoherent tour of DC Entertainment’s new Burbank offices, which makes it look like a fun place to work. The disc is rounded out with Robot Chicken DC Comics Special’s Aquaman Origin Story, Chicken Nuggets, Stoopid Alter Egos, and 5.2 Questions.