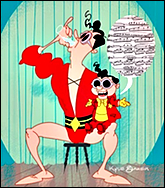 By now, those of you who probably greeted with thudding indifference my first regular post here last week may be whining (privately) about my tone.

As of this writing, that piece hasn’t gone up yet, so I haven’t yet read the comments I probably won’t get. No doubt some of you will slander me as a cranky old fart. I would prefer that you read me, if you read me at all, as Grumpy Cat with alopecia and a litter box that looks like a Mylar snuggie.

My purpose here is mainly to provoke thought, but in this overcrowded blogosphere, what that means is, one has to provoke, period. So I also try to entertain by trying to be funny. (I have some experience with this, having been paid to do so on several occasions.) I’m counting on there being ComicMix readers who know that “shock jock” doesn’t have anything to do with Lightning Lad’s penis.

Which brings me to my subject today (Why Patton Oswalt Is So Lonely At Comic Book Conventions). Fanboys have no sense of humor? Well, why the fuck not?

You like to laugh, right? And you love comics, right? Where is it written that loving something means you can’t see its absurdities? (Oh, wait. Married Geeks = a minority. Forgot.)

Assuming you do like laughing and you like comics…WTF have you got against a one-and-done, and getting both fixes from the same place? Why do so few of you have any interest in comic books that aren’t populated by characters so teeth-grittingly grim that they always look like they’re on the crapper and constipated? Is it too gross to contemplate the idea of a comic book that tries to make you laugh?

Where have all the funny mainstream comics gone? Plastic Man has either gone all deadpan or invisible; Kyle Baker’s given up on the Big Two; Joe Quesada probably doesn’t even know WTF Not Brand Ecch was; and Mike Richardson won’t be blowing any money on another Instant Piano anytime soon. But when did the industry get so risk-adverse? When did their commitment to product diversity become so transparently lip-service?

I know being married to the floppy is a burdensome job, but let’s all learn to lighten the load by leavening it with laughter, aight? In the grand scheme of things, comics aren’t really that important, yo. Your school, if you’re unlucky enough to go to one, will still have textbooks designed to turn you into a Marching Moron. Or it will keep you in debt till long after comics have ceased to exist.

Your job, if you’re lucky enough to have one, will still suck, and the fries that go with it will have been reconstituted, blow-dried, flavor-sprayed, and frozen by a 12-year-old Chinese girl in one of those two-cents-an-hour laborers’ dormitories that gave Mitt Romney a hard-on. And even if you don’t get around to reading this till September, your phone company will still be letting Black Ops guys look at pictures of your junk.

Me, I will recklessly continue trying to bring smiles to your lips, despite your dogged resistance. If I and like-minded writers can’t be funny in comic books, I, at least, will defiantly and unapologetically try to be funny about them – as I did here, and got hugely trolled for it by a lot of Geek jobs who sounded like they were about to cry.

That’s why you’ll also find in my columns that there will be links for some things you don’t immediately understand but also for others that you do.

Well, FYIYCTAJ. And I’ll let you figure out what that stands for on your own time.

You’ve been warned. But imagine a smiley face after that.