Michael Davis: Alone In My Room 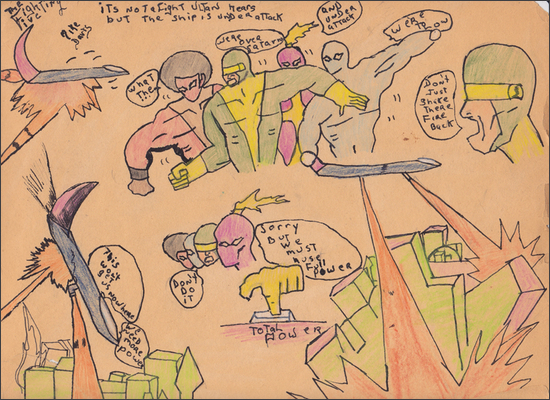 The other day I was sitting in my studio at 4 AM working on a double page spread for a graphic novel I’m writing and illustrating.

There was a movie playing in the background, coffee and tequila on my side table and my dog Puffy laying at my feet. The house was silent, well silent except for the screams of the guy Jason Statham just threw off a roof in the movie I was watching.

Other than that guy screaming like a little bitch, my house was silent.

All of a sudden it hit me. I’m an artist.

I went to school to become a professional illustrator. I wanted to study to be a cartoonist because I wanted to do comics so badly!

My cousin told me if I became a cartoonist I would “stave and die.” My cousin was also my mentor and if not for him there was a very good chance I’d be in jail or dead now.

He’s also a world-renowned artist. How renowned? The house I live in cost less than one of his paintings and I live in a pretty nice house.

So when your cousin who is also your mentor who also saved you from death and/or prison who is also a world-renowned artist tells you if you became a cartoonist you will stare and die, you listen.

I became an illustrator and as luck would have it the industry changed so as an illustrator I could still do comics just not the traditional way they had been done.

My illustration career was pretty damn good before I got into comics that I did pretty damn bad. It took me a while to understand the medium but once I did the work got better…I hope.

Somewhere along the way my illustration and comics career stopped completely as I found myself working in other media: television, publishing, radio and education.

Before I knew it I had a mini entertainment empire going and the only art I was doing was doodling a  fat Batman every chance I got.

At 4 AM the other day sitting in my studio I realized that all is right when I’m doing art. Just me, my dog, my Captain Action mug for my coffee and tequila, a movie and my work is freakin awesome.

No Hollywood drama, no politics, no egos, no bullshit.

It’s like when I was in the sixth grade drawing the adventures of The Fighting Five my very own superhero group. The Fighting Five were, the Liberator, (spelled Liverator; I went to public school) Bulldozer, The Anything Man (because I couldn’t think of anything else to name him) Judo Master (stolen from Charlton Comics but I felt I could use him because his book was cancelled) and The Human Torch (but it was the original Human Torch and I felt I could use him also since Marvel had thrown him away).

When I was alone in my room in the projects with my art nothing else mattered and I was the happiest I’d ever been as a child. Now, I’ve come full circle as I sit in my studio alone at 4 am in the morning happy with what I’m doing and who I am.

People have a hard time putting me into a category because I wear so many hats. I usually just say I’m a content producer but that’s never really felt right to me. It’s just an easy way for me to say, I’m a writer, TV producer, etc., etc., Shado, Shado (a invitation to my annual San Diego Comic Con party to the first person that gets that joke) I just figured out at 4 am in the morning sitting in my studio what and who I am.