“Masks of Madness” a tale from the anthology DOMINO LADY: SEX AS A WEAPON, Moonstone Books
Written by Martin Powell 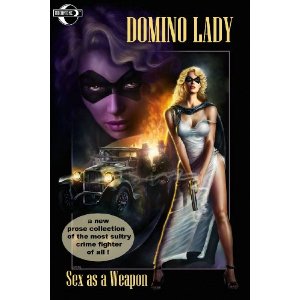 Written for a collection published in April, 2009 that centered around Domino Lady, this story not only clearly spotlights the anthology’s title character and then some, but it adds layers to a couple of mythos as well as to the world that Powell writes within in general.

The plot is that our heroine wakes up on a jungle beach after fighting pirates.  She is taken in and cared for by people of the jungle who are in service to a certain Ghost Who Walks.  While taking advantage of Mr. Walker’s hospitality, Ellen Patrick finds a bit of information that links to her past and has a major impact on her present and future.  This tidbit leads her back stateside, followed of course in grand pulp hero style by the aforementioned Ghost (Lee Falk’s The Phantom for those who don’t know what I’m talking about.)

Martin Powell once again sets his pen to the pulp canvas of words and paints a tremendous epic adventure in a handful of pages.  The characters are very clearly defined, even the Phantom who, although he plays a major role, is also really just sort of incidental to the action.   Powell’s take on Domino Lady does something well that writers have struggled with for years.  In his characterization, he skillfully balances the sex appeal of this character with the need for justice and vengeance, a largely male trait ala Batman that often gets muddled when applied to female characters. Not so in this version of Domino Lady.  Her struggles with right and wrong, her thirst for violent retribution, it’s all played out well here and none of the playful sensual passion that should be there is lost at all.

The action in this story flows well overall.  As a matter of fact, the timing of the events and the changes of scenery were dead on perfect.  When we go from the jungle back to the states, it was the exact right moment.   Some of the narrative gets heavy in places, even for pulp, but other than that, ‘MASKS OF MADNESS’ is a revealing look at a little known, yet wonderfully varied and layered character.