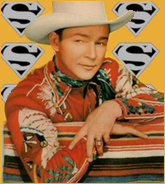 …the third consecutive week that the Geezer, also known as me, used that hokey lead. Pathetic? You decide.

But as long as we’re here…what’s the Man of Steel doing this time? Looks like he’s holding his ears. That must mean that he’s somewhere near the end of his hit movie, at the climactic battle, before a kind of lengthy denouement. Because that was one noisy climax. But first, a geezerly digression.

You have to admit that there’s a certain logic here, and I wonder if some vastly mutated iteration of this logic isn’t operating up there on the screen with Superman. And not only Superman – with other cinematic superheroes, too. The fights are big and noisy and go on and on and on…and before the final biff is powed, I’m out in the auditorium getting just a bit antsy. Not bored, just, maybe, wishing that the screen combatants would end it, like my preadolescent self wished that the mushy parts of the pictures would end, the parts that usually involved a girl. (And, in those day, I didn’t have long to wait.)

I understand that spectacular physicality is the lingua franca of superheroes, as essential to their genre as Roy’s horse Trigger was to his. But can’t less be more? Let the tension and suspense get bigger and bigger, let it build and build and then give the folks in the seats a final burst of action that solves the hero’s problems and vanquishes the villain and allows for a quiet and satisfying ending. Don’t serve me a protracted bunch of noisy clashes with essentially faceless pawns before the finale. Define the geometry and conditions of the combat and let us see it clearly and don’t put in anything that doesn’t somehow bear directly on the spine of the story. Such would be my advice.

And such is my quibble, for quibble it is. Almost half way through my eightieth decade, I can enjoy the fantasy melodrama I see as much as the grade-school me enjoyed the cowboy pictures. Okay, except for the ones with Roy Rogers – nothing can be as good as them.