Marc Alan Fishman: The Real Samurnauts – From Fans to Friends to Family 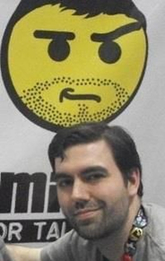 Forgive me folks. Today’s column is going to be a sappy, crappy, and sweeter than caramel drenched hot fudge balls dipped in rock candy. Consider this my spoiler alert: there’s absolutely no snark in today’s column. There’s only the happy tale of how a pair of acquaintances became so much more to me and to my Unshaven brethren.

The only thing truly standing in my way of bringing the noise and the funk to my half of every Samurnaut book were real life models. I make no bones about my abilities: I draw from life. A blank paper to me is less an invitation to showcase a spindly Spider-Man or healthy Hulk. I was trained to draw what I see, and sadly my mind is far too left brained to maintain an image well enough to reproduce from grey-matter to hand. But I digress.

When it came time to shoot The Samurnauts, I opted to reach out to those whose faces I wasn’t so acclimated to. That, and I honestly didn’t want my immediate family and friends traipsing around as superheroes. My call-to-action was met (largely) by members of a local(ish) comedy troupe I had opened for on a handful of occasions. Oh yeah. I should totally mention: for a hot minute I considered pursuing stand-up comedy. Don’t look it up on YouTube. Seriously. Don’t type “Marc Fishman Stand-Up.” Don’t say I didn’t warn you. OK? OK. Where was I?

Oh yes. Six members of “Big Dog Eat Child” were kind enough to lend their faces to The Samurnauts. With said Big Dogs I was granted a set of models built for emotion and staging. Putting a nerf gun into their capable hands and shouting “be heroic” showed their natural talent to contort and twist into brand new people. Amongst them, Erik Anderson and his wife Cherise (not of the troupe, but equally interested in helping out when our initial model had to cancel) stood out as being very much into becoming superheroes. After a fun afternoon of digital photography, Nerf wars, and prancing about… I made a last-minute offer to my new models. “If you are ever curious as to how this will turn out, feel free to look me up on Skype.”

It could not have been maybe a week or two later that my computer buzzed at me. Erik and Cherise, in the heart of the weekend (when most everyone is enjoying not having to make comic books), wanted to check in. And there they stayed glued to their screen watching me build a comic book from roughs to inks to colors to lettering. Over the course of the weeks that it took, they stayed up on Skype night after night watching the construction. Suddenly I was no longer making a comic alone in my basement… I was drawing for an audience. An audience willing to literally stay up with me until they couldn’t stay awake. As they would later tell me… I was better than HBO.

When the first issue of Samurnauts came hot off the press, Erik and Cherise were at the convention with bells on. Not happy enough to simply see a final copy of their issue, they were determined instead to see Unshaven Comics succeed. They grabbed a handful of business cards and took to the show floor to spread the word. A husband-wife guerrilla marketing team… doing the job we figured would not be gifted to us for many many years of convention-trenching. Oh how wrong we were.

Over the years (which I can’t even believe is how long we’ve been doing this…), Erik and Cherise have become less friends of Unshaven Comics, more family. Every convention, literally every convention we have attended since The Samurnauts was a thing, they have been in tow. We launched a Kickstarter to turn Erik into a cosplayer. And when it succeeded, soon our Blue Samurnaut was showing up in every costume-round up album across the mid-west. And this past weekend in Charlotte, North Carolina, both Erik and Cherise stood behind tables pitching our wares at Heroes Con in lieu of our own Kyle Gnepper (who was deservedly enjoying a vacation gifted to him by his non-comic-book-making day job). They did it without being asked. They did it because they love our book. They did it because they want to see us succeed.

There’s that gem of a lyric… “I get by with a little help from my friends…” And never before would I have found it to be so profound. Unshaven Comics is substantially lucky to have a plethora of amazing friends out there in the industry. We’d be remiss not to thank Mike Gold, Glenn Hauman, Adriane Nash, and the whole lot of ComicMix‘ers for the continuing success we’ve achieved in the five years we’ve seriously pursued our dream. Erik and Cherise engrained themselves into our studio and company without asking for anything more than the promise of continued hero-dom. A price we still feel guilty for today.

I know those of us who make comic books have many reasons to be cranky, snarky, angry, or bitter. But here I sit in awe of two people who Skype’d in with me once because they loved the idea of being heroes to the world… and ended up instead being mine.