FROM www.badtigerstudio.com
Welcome to The Bad Tiger Studio premiere!
BAD TIGER STUDIO is proud to present its grand opening with action, thrills and tales of amazing adventure.

BAD TIGER STUDIO is the creation of C. William Russette and Justin Ditzler. The mission is simple. We will bring to you the kind of stories, in comic book and strip format as well as prose, that we want to be reading but have not found. This will range from Sword and Sorcery to Paranormal Thrillers to Pulp Fiction in all its glorious and sometimes gory forms.

In our premiere release we have two comic books, three comic strips and one prose serial: 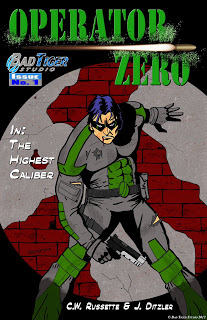 Operator Zero is the high speed, quick-draw, adrenaline packed saga of one man against overwhelming malevolent forces for the sake of Justice.
A poisonous business mogul, the crime cartels, and the government of a crime laden Chicago in the not too distant future all defy the law.  OPERATOR ZERO is beyond the courts law. He will hunt those that hide behind strength, money and power.  He will be the scourge that no one else dares become toset right the wrongs done him and those he considers his family.
Not for revenge but Justice has he taken the fight to the enemy.
His enemies will flood the gutter with blood.

THE HAWTHORNE CHRONICLES by Frank Dawson Jr.
The Hawthorne Chronicles is an adventure pulp tale based in the 1930’s. Three adventurers travel the world collecting supernatural artifacts that have fallen into the hands of people who would use them for evil purposes. James Hawthorne is the founder of the Hawthorne Foundation. The sole purpose of the foundation is the collection and return of artifacts for reward which funds the trios further adventures.
John Eagle Eye is a Native American of the Cherokee Nation. James and John met in World War I in Europe. They have saved each others lives several times and are blood brothers. Claire Hawthorne is the 16 year old daughter of James and Lilly Hawthorne. Claire is extremely talented at building gadgets, machines and their repair.
When Claire was a baby Lilly was murdered by a man using a supernatural artifact he was attempting to steal. Vowing to never let this happen to anyone else, James And John created the Hawthorne Foundation toremove such dangers from the hands of evil doers!

THE SKULL by D. C. Golightly and Brandon Wilt

Who is The Skull? This mysterious midnight manhunter has burst onto the scene of Delta Point, a city that loves it’s secrets. His bizarre mask is not only his trademark, but his curse as well. The underworld is just beginning to realize how dedicated this vigilante is in his quest for justice, even if it means circumventing the law. 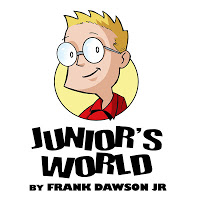 Junior’s world is a Strip about a Boy named Junior. He lives with his Uncle who is just a little too weird for Junior. Although they are very much alike, they are from different generations and don’t see the world in the same geeky light. 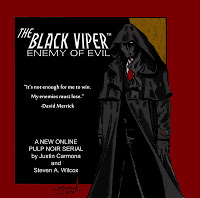 THE BLACK VIPER by Steven Wilcox and Justin Carmona

When darkness falls over the city of Bright Haven, a Hero will emerge from the shadows. The Black Viper: Enemy of Evil is a New Pulp Noir Serial that follows one Man’s quest to rid his city of the evil that has taken over.

A breeding ground for the evil that infects the seven nations, Nak Annih has been carefully barricaded to hold back further incursions from the Orc army and their terrible high priest. More and more outbursts of lone Orc contingents have been plaguing the borderlands, however, pushing the king to reach past the barrier and seek peace. His agent, a stalwart swordsman and campaign hero, Bolstagg Freilander, has been tasked with penetrating the barrier and bringing the treaty into the dark land. Even though he is renowned for his honor and bravado, Bolstagg knows that luck will outweigh skill as he ventures onward into THE BLACK KINGDOM.

We promise an interesting ride. Do join us.

Mind the Tiger. He Bites.