Michael Davis: Don McGregor And Why Black People Love Him 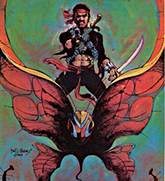 Right now Nick is dealing with an issue that involves my dear friend Don McGregor. I can think of a lot worse people to deal with than Nick who has always been cool with me. I have high hopes that Nick and Don get on the same page and that’s all I’m going to say about that.

However, I will say a bit more about Don. As readers of ComicMix have no doubt noticed I have some recurring themes in my articles among them African Americans in the industry, the High School Of Art and Design and Asian Women.

Even I know that sometimes returning too often to a theme can get a little tiresome. Except for the many Asian women mentions, I realize that the constant mentioning of my high school (the greatest high school on the planet) and black people (the darkest people on the planet) can just get tedious. Yes, mentioning Asian women can certainly get monotonous also, especially to black women, but I really could care less.

Black Women! That Was A Joke! I Love my sisters…long time.

There is a recurring theme I wish I revisited often and I don’t think my readers would object too and that’s my love letters to creators I’ve had the pleasure to meet and often become friends with. Every so often I meet and befriend a creator and it’s always cool.

Not as often I meet and befriend a creator who I idolized beforehand and that creator becomes like family to me, Don McGregor is one of those creators. I do so love me some Don McGregor and yes I’m going to write about black people but in a first for me I’m combining two recurring themes: black people in the industry and a love letter to a creator!

Don McGregor is just a great and I mean great guy. He also just happens to be one of the best writers to ever write for comic books.

When I met him I stammered like a little bitch I was so in awe of this man. THIS from a man who hangs out with academy award and Grammy winners and whose annual San Diego Comic Con party has a guest list that reads like a Barbara Walters after Oscar special. I’m not saying any of this to impress you I’m saying it to underscore how freaking jazzed I was to meet Don McGregor.

One of the reasons I started the Black Panel, a forum to discuss African Americans in the entertainment business, and why I return to the black theme so often in my articles is because the African American experience is a complicated one.

I’m just trying to give some insight into that experience from a black perspective. I’ll let you in on a little secret; black creators seldom think white boys write good black characters. Don’t get me wrong-some of the greatest black comic book characters were created by white boys.

This massively awful, Marvel some time ago introduced a new Bucky. He was a black man who stood six foot three inches.

What’s the problem, you ask?

He gained Hulk like powers yet he retained his intellect.

What’s the problem with that you ask?

Well after he got his Hulk like powers this scientist decides to become a fucking thug and start dealing drugs. So let’s recap: he retains his scientist intellect and becomes a thug drug dealer.

Look, I think Mark Millar is a good writer but a character gaining Hulk like powers while maintaining a scientist intellect becomes a thug and a drug dealer? How the fuck is that not some thoughtless stereotyping?

I’ve got a lot more examples of screwed up black characters created by some white writers but that’s an entire book in and of itself so I’ll just let the two examples I used stand. Not that I give a shit what people think but let me say this, there are some incredible white writers who write great black characters and on the flip side of that there are some great black writers who write horrible white characters. Oh and Mark before I forget, when I received my PhD the first thing I thought about was robbing a liquor store. Nah, I’m just kidding, but as soon as I get Hulk like powers…

Sabre is one of Don’s creations is one of the best comics I’ve ever read. Sabre is a black character, in case you were born yesterday. Why didn’t I mention it above with the other great black characters created by white writers?

Because Sabre is in a class of its own.