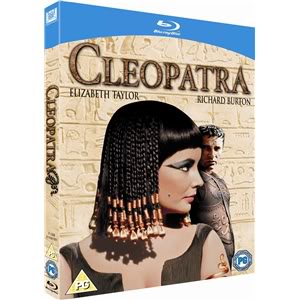 There is a sumptuousness and exotic look and feel to the Ancient Egyptian culture that I have always been drawn to. The clothing, décor, architecture – it has always been utterly fascinating and their monarchies and dynasties are as rich as any in Europe. One of the best biographies I read in the last few years was Stacy Schiff’s Cleopatra, which mined all known existing records about the Queen and attempts to weave together the most likely version of her storied life and death.

On the other hand, the 1963 spectacle of the same name merely adapted Plutarch’s version of events. Today, Cleopatra has become shorthand for a bloated misfire of a film and is always cited as the one that nearly caused 20th Century-Fox to crumble. The studio survived and has had the last laugh, making a fortune off the film ever since. Out now is the overdue Blu-ray edition and they have lavished much attention on the production so it’s the best version you will find for home viewing.

Starring Elizabeth Taylor, she was in her thirties and at her optimal beauty, making her the ideal lead for the movie. Her stardom was such that the studio was willing to plunk a cool million for her services, setting a new record for actors. They budgeted $2 million for the film but the costly production swelled to a then-record $44 million (over $325 million today) until the next $44-million record film budget, which was, of course, Star Trek: The Motion Picture.

The film was a labor of love for Joseph L. Mankiewicz, who codirected, cowrote, and coproduced the film. While it made headlines for Taylor’s salary and affair with costar Richard Burton, it also brought home four Oscar Awards, including Best Cinematography and Best Effects, Special Visual Effects so it couldn’t have been all bad. And it’s not. 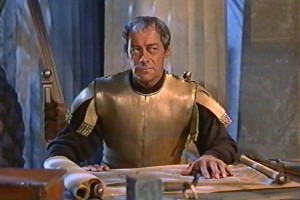 We start in 48 B.C. and end with her death in 30 B.C. and during that time Cleopatra VII rose to rule then oversaw her country’s absorption into the Roman Empire, loving Julius Caesar while using that relationship to protect her people. Gaius Julius Caesar (Rex Harrison) chases Pompey to lush Egypt, just in time for a civil conflict as Pharaoh Ptolemy XIII (Richard O’Sullivan) has sent his sister Cleopatra out of the capital city of Alexandria. Caesar and Cleopatra meet, scheme together, and in the process, fall in love, changing the fate of two governments.

They produce just one son, Caesarion, a living symbol of the two countries’ enduring unity but he is so besotted with the Queen, he neglects his duties back home long enough to stir talk of rebellion. In time, he goes home and soon after she comes to visit, he is named dictator for life and subsequently assassinated. Mark Anthony (Richard Burton), the new ruler, eventually follows Cleopatra back to Egypt where they start their own torrid affair, allowing Caesar’s nephew Octavian (Roddy McDowall) to plot his own overthrow. 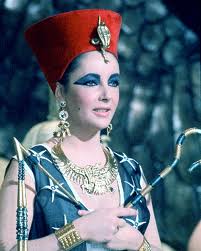 This is a long film, with a lot of lingering views of temples, pyramids, courts, and costumes. Taylor had a record-setting 62 costume changes in this production and we must pause to notice every bangle. The pacing, thanks to two editors, is a little uneven and 20th balked at the length, trimming after its premiere and destroying much of the cut footage. What we get is the 151 minute New York premiere edition, complete with Overture, Entr’acte and Exit Music.

Thankfully, the restoration is brilliant and gorgeous to watch. The colors are vibrant and the action a pleasure to watch. Similarly, the DTS-HD Master Audio 5.1 track is a match so you can hear the sand crushed beneath the sandals.

Given the film’s running time, it is split over two discs but comes with a ton of extras starting with an examination of  Cleopatra’s Missing Footage (9:00), wherein film historian Brad Geagley and 20th Century Fox film archivist Schawn Belston take you through the history.

In Fox Legacy with Tom Rothman, the studio CEO reviews the tortured production, trying to separate truth from myth (30). Cleopatra Through the Ages: A Cultural History offers us Professor and Chair of Anthropology at UC Santa Barbara Stuart Tyson Smith as he talks about the historic personage (8:00).

The Cleopatra Papers: A Private Correspondence lets us glimpse at the work retinaed by publicists Jack Brodsky, based in Rome, and Nathan Weiss, in New York until they swapped places. were the publicists for 20th Century Fox during the epic production of Cleopatra. One was stationed in Rome, the other in New York – then they switched places.

The second disc offers up Cleopatra: The Film That Changed Hollywood, a two-hour film about the making of Cleopatra, which explains that the blockbuster was competing with television, keeping the studios relevant to audiences. As narrated by the great Robert Culp, this makes compelling viewing.

The Fourth Star of Cleopatra is a ten minute short showing some behind the scenes footage of the massive set constructions.

Hard to believe they still had Fox Movietone News in the 1960s, but the disc has footage from the  New York and Hollywood Premieres. (7:00 min).  Finally, all three movie trailers are included.