HANCOCK TIPS HIS HAT TO ‘MAN-MADE TROUBLES: THE FIVE-MINUTE FRANKENSTEIN! 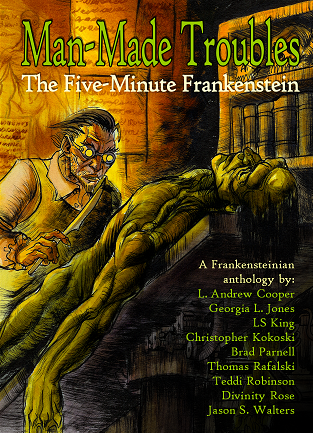 There aren’t many fictional names that conjure vivid images in young and old, fan and neophyte, expert and novice, reader and nonreader, like Frankenstein.   Originally a novel of course by Mary Shelley, a fact almost every modern person in existence over the age of 12 probably knows, the concept of Victor Frankenstein stitching together parts of various corpses and charging it with life has gone so far beyond Shelley’s original pages.   The indelible images of the Doctor and his Monster are so engrained in our society and consciousness that effort is made by many to prove that both the human and the created being actually existed or at least had basis in reality.  Still others have taken the Frankenstein tale and retold it in different settings, updated it for modern consumption, or simply taken the themes of the original tale and woven those now classic tropes into new tales.

All of that and more is exactly what the writers of MAN-MADE TROUBLES: THE FIVE-MINUTE FRANKENSTEIN have done with some success.

As stated in the book’s introduction, this is a collection that came out of a group of writers associated with BlackWyrm Publishing discussing doing a Frankenstein anthology.  The plan for the collection seems fairly simple and straightforward, with an interesting twist.  Writers were to write a tale about or inspired by Frankenstein, either the doctor, the monster, or both, and to link either directly or thematically to the source work.  The kicker was, however, that each writer only had four pages to do so, about 1200 words to tell a complete story.

The result of this interesting set of rules turned out to be a rather enjoyable mix of horror, humor, and even adventure as well as a revealing look at just how much we as mere humans connect to the Frankenstein mythos.  The stories range from starring the Monster himself as well as various Frankensteins to simply being about the feeling of one’s life being nothing but mismatched parts of others’ experiences.  Dystopian futures are a common element in more than one tale.  An interesting twist on a classic fairy tale with a hint of Monster is included as well.  Ranging from the straightforward to the abstract, the short short tales in this collection pretty much all hit the mark they aimed for.

Were some better than others? Sure.  The stories by Georgia L. Jones, Divinity Rose, Christopher Kokoski, and Jason S. Walters stand out, but all the tales were fine entries in this quirky collection.

A setback for readers, however, may be the price of the print edition.  It’s a ten dollar book on paper, but the ebook is only 99 cents.  It’s well worth that and more to enjoy this, so if the money’s an issue, pick it up digitally!

THREE OUT OF FIVE TIPS OF THE HAT-The stories are overall fun and engaging, with a few near misses, but definitely an interesting read overall!