In a short period of time, two 20th anniversary box sets have been released, both using XX in their titles. The wonderful Canadian band Great Big Sea just had their celebratory two-disc set come out and now comes Tarantino XX, a more appropriately named set, commemorating the filmmaker’s two decades in the business.

Quentin Tarantino began like so many of did, obsessed with movies and television and pop culture. His tastes ran along the fringes such as the Hong Kong martial arts fare and the Blaxploitation films of the 1970s. A walking, talking cornucopia of film lore, he was the perfect video store employee, never at a loss for a recommendation regardless of taste. He fortunately turned those interests to filmmaking, bringing his knowledge and passion to screenplays for others and his own works. 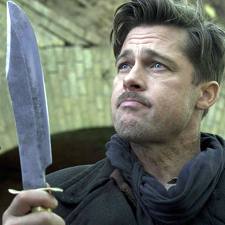 If you had to write one line about his work it would be “Always shoot first, ask questions later” as his films are often violent blood fests. For those who appreciate his storytelling skills, you accept and enjoy the bloodshed since it’s all so over the top as to be step over the line between real violence and cartoon violence. Instead, you’re captivated by seeing fresh ideas, original and memorable characters who spout crackling, idiosyncratic dialogue.

He made us sit up and pay attention to his skills with Reservoir Dogs, a blend of mayhem and character that was filled with excellent dialogue and sharply delineated characters. After that, he came out with the brilliant Pulp Fiction and he became an actor’s director, always giving them something unusual and fun to play. As a result, his movies have been stuffed with actors from all corners of Hollywood, having the time of their lives. Why? It’s because his films are tightly structured pieces that pays as much attention to structure as it does to dialogue, making these riveting experiences.

The box set contains all seven films from his director’s chair – Reservoir Dogs, Pulp Fiction, Jackie Brown,  Kill Bill Parts 1 and 2, Death Proof (Tarantino’s contribution to Grindhouse), Inglorious Basterds, plus True Romance which he wrote but the late Tony Scott directed.  All that’s really missing is “The Man from Hollywood” segment of Four Rooms. While all have been previously released on Blu-ray and come complete with their usual extras, the box comes with five hours of new material spread over two discs.  The films look and sound as one would expect so there’s nothing to fear about keeping your originals but for Tarantino fans, the extra material is worth having. For anyone with gaps in their collection, the box is well worth having and revisiting before seeing Django Unchained later this month. 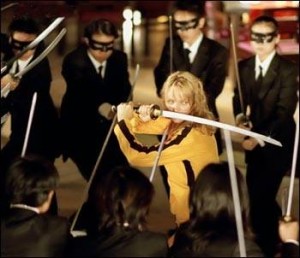 Disc one contains the complete unedited version of the Critics’ Corner: The Films of Quentin Tarantino (4:50). Much of this has been sprinkled throughout the extras of many of the solo releases but you can hear some interesting critical thoughts from Scott Foundus, Stephanie Zacharek, Tim Lucas and Andy Klein. They work their way through Tarantino’s films, one by one, and their insights are useful in placing the films in context. It’s not all laudatory as the talking heads express preferences for some films and rejections of others while still appreciating the craft. Many interesting insights are offered up such as the alternate reality World War II tale, Basterds is all about language.

The second disc begins with Quentin Tarantino: 20 Years of Filmmaking (2:13), a fabulous career retrospective that traces his career from initial screenplays to first sale. Lawrence Bender, Robert Rodriguez, Pam Grier and Robert Forster show up to tell some funny anecdotes while Stacey Sher compares Tarantino to Roger Corman which is probably high praise to Tarantino even if I find it a little off the mark. Sally Menke, Tarantino’s perennial editor nicely receives her due here. Then there is Jackie Brown Q&A: A Film Independent at LACMA Event (32:15) as columnist Elvis Mitchell talks with Grier, Forster and Tarantino. Pleasant but nothing earthshattering here. We’re rounded out with Django Unchained—Coming Soon (10:43) which is a collection of trailers.

If you’re like me, who loves the musical stings that harken back to other projects or adore seeing character actors given something fresh to do and don’t mind the violence and gore, then you’ll probably appreciate sitting down with this fine set.