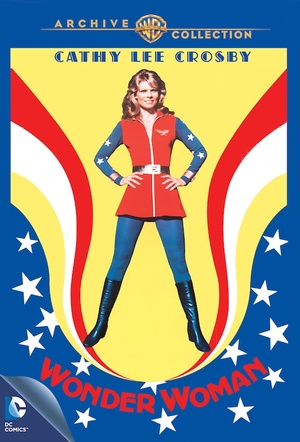 When even Joss Whedon can’t nail a character, you know there’s a problem. For decades now, film and television has been struggling to take Wonder Woman from the comics and bring her to a wider audience. So far, they’ve managed the Super Friends and the delightfully awful television series with picture-perfect Lynda Carter. However, there are scores of failed attempts beginning with the truly awful William Dozier-produced try out footage through last year’s cringe-worthy attempt from David E. Kelly.

Perhaps the most maligned of the attempts is the ABC Movie of the Week, Wonder Woman, which aired once in March 1974 and did well enough in the ratings for a series to be considered but was seriously retooled into the Carter vehicle. Thanks to Warner Archive, that 73 minute effort is now available for completists everywhere.

Yes, she’s Diana, princess of the Amazons and sent to man’s world. Somehow the unnamed Queen mother has decided the time has come for men everywhere to learn that women are of equal value so sends Diana to teach them. The very next scene has her playing the not very liberated role of secretary to Steve Trevor, who heads some federal agency. Absurdly, ten books with the names of 39 strategic agents around the world have been stolen by international mystery man Abner Smith. With seventy-two hours before they are exposed, the United States has to recover the books or pay millions in ransom. While a bunch of suits are given an hour to ponder the dilemma; Steve, with a wink and a nod, let’s Diana to take time off to see her “dentist”. 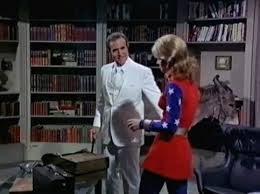 So much is left unexplained starting with how the Amazons have learned about the outside world and how Diana has acclimated to life in America. Her exact powers are never outlined nor is her bizarre not-very-secret identity. As written by executive producer John D.F. Black, we are expected to accept things on face value and go with it which is odd considering his extensive credits in dramatic television, including an influential role in the first half season of Star Trek.

Wonder Woman tracks down Smith, based in a nicely appointed hideout deep within the north face of the Grand Canyon. There’s some fighting, some deering-do and the odd arrival of fellow Amazon Angela, who has jealously followed Diana to the outside world to seek the wealth it offers. 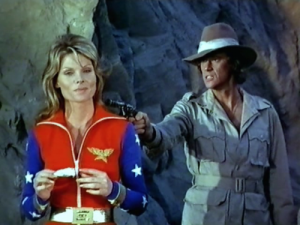 The story makes no sense nor does this serve well as any sort of a pilot. What is interesting, though, is the banter between Diana and Smith or Diana and Smith’s flunky George. Here, Black demonstrates some nicely handled character, letting the bad guys be a bit more multidimensional than the star. It helps that Smith is played by Ricardo Montalban, decked out all in white long before he set up shop on Fantasy Island. He nicely chews the scenery and has nice chemistry with the Amazon Princess, woodenly played by tennis pro turned actress Cathy Lee Crosby. In civilian garb or an Olympic outfit masquerading as her costume, she lacks the imposing physique of an Amazon and her action sequences are not very athletic-looking.

George is played with some relish by Andrew Prine who makes the most of his sidekick role. The rest of the cast is there to advance the story, nothing more, so Kaz Garas as Trevor or the fine character actor Richard X. Slattery have absolutely nothing to work with. Director Vincent McEveety, another Trek alum, does a by-the-numbers job with the story, making it look generic.

I recall watching this as a teen and was appalled, stunned to learn that ABC actually thought enough of it to go to a series of TV movies a year later. Thankfully, by then, they jettisoned Crosby for Carter and in November 1975, we got our first glimpse of what would be an icon of the decade.