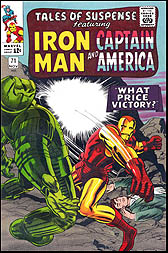 I think I know what I liked about Tony Stark when I first encountered him back in Cape Girardeau. I was a cheap-seats journalist who was just rediscovering comic books after forgetting about them for more than a decade, spinning the rack at the drug store, scanning the displays in the bus terminal, killing time in a strange town by reading these relics of my childhood. And liking them.

I particularly enjoyed some of the mags that bore the Marvel Comics logo, and among these, staple-to-staple with Spider-Man, The Hulk, The Avengers – the beginnings of Marvel pantheon – was Tales of Suspense, a title that delivered two stories, two heroes. These were Captain America, a super-patriot I dimly remember enjoying when I was six or seven, and a new guy, Iron Man. His other name was Tony Stark.

There was a lot not to like about ol’ shellhead, as he was sometimes called. Let me count the ways… He was an arms dealer and, to a peacenik like I was, arms dealers belonged somewhere deep in hell. He was a capitalist. (Okay, nowhere near as bad as being an arms dealer, but I did not count the Rockefellers among my role models.) He was a technologist and, like a lot of hippie-types, I did not trust technology. (There is evidence that technology has been exacting revenge ever since. Note to technology: I was wrong, okay?) And finally: it was suggested, though maybe not much shown, that our Tony was both a conspicuous consumer and a womanizer. Two more nixes.

But he got his powers from a device he invented to deal with a heart damaged by shrapnel. For some reason, that appealed to me. I’m pretty sure that I’d never read the story of the centaur Chiron – Catholic schools in the 50s were not big on “pagan” mythology – and so I didn’t know the tale of the half-man/half-beast who was wounded by a venom-tipped arrow and could never be healed. Chiron was a great teacher but what qualifies him as a possible predecessor of Iron Man is that he later gave up his life to redeem Prometheus and that gives him hero cred. (The other side of the story is that Chiron, being immortal, was doomed to countless eons of agony because of that damned wound and he could have seen the Prometheus situation as a quickhop off the struggle bus. But he never really existed, so mind.) Anyway: even with twisting and tugging of the myth, it’s hard to make a case for a direct connection between Tony and Chiron, and yet Chiron was the closest analogy to Iron Man I could find. Why bother? Because maybe by rummaging around in antiquity, I’ll be able to figure out why I responded favorably to an tin-plated lounge lizard.

Later, Tony redeemed himself and became a good guy I could like without those nagging reservations. But those first meetings…Well, I liked womanizing assassin James Bond, too. Still do.