Babblr: anatomy of a misfire, and how to avoid launch mishaps 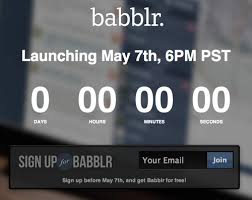 Tumblr is a micro-blogging site, tending more towards short posts with pictures and video attachments, and with over a hundred million blogs (including mine), it is officially more popular than blogging itself.  It’s populated by an amazing assortment of creativity and madness.  Memes flower and spread with a speed heretofore unseen (seriously, go look up “Moon Moon”), and the love the users shower on its fandoms is staggering. So when a new third-party app called babblr began to get serious buzz, promising real-time chat for tumblr users, excitement was high. When it was released on the 7th, there was no surprise that it was downloaded quickly and used heavily.

The creators of the app were expecting perhaps 50,000 users in the first day.  They got 50,000 downloads the first half hour.  I would bet you could fry eggs on their servers.  Someone must have spilled the butter, because hours into the launch, the app and its servers shut down.

It has not been a good week for the three fellows who wrote babblr.  Hopefully, future app designers can learn from their mistakes.

DO NOT UNDERESTIMATE THE INTERNET – If there are one hundred million tumblr blogs, even a fraction of one percent of that is a staggering number.  So to make your first beta release available to the entire Internet is at the very least, a risk. Compare to Thrillbent, which proudly weathered their first Reddit storm earlier this week.

COMMUNICATION IS KEY – In a vacuum, facts appear spontaneously to fill the void.  When babblr shut down, people immediately began spreading rumors that it was in fact a hack program, designed to drain your bank account, spam your email box and delete your reaction GIF folder.  And there wasn’t nearly enough data coming from babblr to stem the tide.  Save for the odd tweet to the effect of “we’re working on it” and “It’s not a hack!”, there was little information forthcoming.  They needed to post a LOT of data, on their main website, the one that you want to download the software.  A generic “the download is unavailable” message is insufficient.

YOU HAD ONE JOB – Make an app that worked.  Reports claim that it did work rather well before it crashed, but people began reporting that even when it wasn’t running, the add-on seemed to interfere with other popular tumblr customizers  like Xkit and missing-e, causing some functions to fail, adding fuel to the “hack” rumor frenzy”.  It clearly needed more testing (with other popular apps) before ANY release, especially one as wide as they went for.

ASKING FOR MONEY AFTER YOU DELIVER A BROKEN PROGRAM IS A UNIQUE BUSINESS MODEL – Two days after launch, and one after the servers curled into a ball and died, an update was posted on their website.  The app will be repaired shortly – if everybody ponys up a couple bucks.  After offering the app for free, it will now be made available to a limited number of users who pay for the privilege.  In short, they will have the Beta program they should have had in the first place, and get paid for it.  Assuming anyone goes for it, that is.

THERE CERTAINLY SEEMS TO BE A MARKET FOR AN INSTANT CHAT PROGRAM FOR TUMBLR, DOESN’T THERE? – That’s the big message to take away from this.  Tumblr users jumped onto this like a starving man on a Ritz cracker.  Should an app come along that has what it takes under the trunk to deliver what tumblrers clearly want, it could do very well.  I expect we’ll see at least two new entries in this brand spanking new market by end of year.