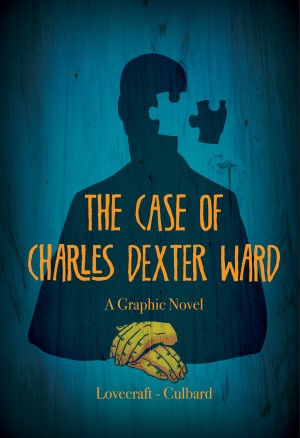 I never could warm up to H.P. Lovecraft’s prose. It was turgid and overly descriptive, so on the one hand, he had a tremendous imagination but put me to sleep as he conjured up the unimaginable horrors. His visual imagination gave birth to the legend of Cthulu which remains all he is remembered for by the mass populace. Still, people turn to his works for inspiration or, in this case, adaptation. INJ Culbard has adapted Lovecraft (1890-1937) before with At the Mountains of Madness and has also done some noteworthy versions of Arthur Conan Doyle’s Sherlock Holmes. Domestically, he probably best known for his collaboration with Dan Abnett on Vertigo’s imaginative New Deadwardians.

Now he tackles The Case of Charles Dexter Ward, Lovecraft’s 51,000 word short novel written in 1927, streamlining the story and bringing the dialogue heavy tale to life. SelfMadeHero has released this in Europe and now it comes to the United States through their relationship with Abrams. Originally a short story expanded to novel length, Lovecraft was said to have disliked the longer version but it gave Culbard plenty to work with. In short, this is a two-person tale, Ward, has become fascinated with his relative, Joseph Curwen, known for his regular visits to local graveyards. Curwen seems ageless and Ward tries to replicate the experiments that prolonged the man’s life and of course, things turn out differently. Now incarcerated, he tells his tale to Doctor Marinus Willet. As a result, Culbard is given a chance to take the reader from the past to the present and back again, as the story unfolds and the horrors are revealed. 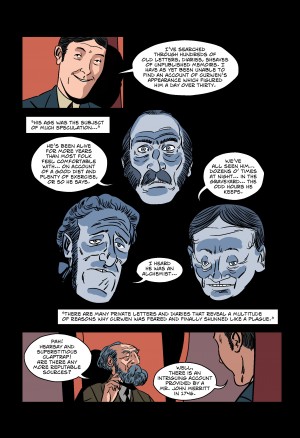 The words may be Lovecraft’s but the storytelling and pacing are all the artist’s and he brings a nice variety to the visual narrative. Given how dialogue-laden this is, he mixes things up nicely and takes us on the journey. The heavy black borders on each page along with the somber coloring adds an atmosphere of dread to the proceedings.

This is a story of mistaken identity and Ward’s perception of reality is altered, and Culbard drops much of the descriptive narrative to focus on the images and it’s less effective than hoped for.

Where he falls down is in depicting the monster, brief as it is. Considering this is the debut of Yog-Sothoth to the Cthulu mythos, it should be far more momentous.  It just isn’t frightening so after all this build up, you’re left thinking, “Is that it?” He told Comic Book Resources, “Often, his characters aren’t there for you to invest in them; they’re there to guide you through a nightmare because the horror is often so much bigger than the individual. But this is partly why I think Lovecraft’s work lends itself so well to a visual medium like comics, because the minute you draw a face, you’re entering into characterization. Really, to some degree, Lovecraft provides you with a blank slate. The trick is really determining what you show. Quite often, Lovecraft would only really give you a glimpse of the horror, because to see it in its entirety would be too much for the mind to comprehend.” While he’s correct, he didn’t pull this off as successfully as intended.

Still and all, the ambitious adaptation is more successful than not and for fans of Lovecraft’s output, this will be well-received.