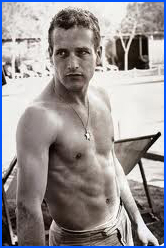 We pick up the story a few months after my parents pulled me out of Quinnipiac and sent me off to work to “learn the value of a dollar.”

I joined the drones commuting to lackluster jobs on Wall Street. Got a job as a receptionist. Had my first experience with sexual harassment from the big boss, though it wasn’t called that back then and zero-tolerance policies were still twenty years in the future. Didn’t crumble. Called the guy an asshole and quit. A good feeling. Went home. Worried about what the parents would say. Told them I got laid off. Said I would start looking for a new job “tomorrow.” Picked up my battered copy of Exodus (by Leon Uris) and started reading. Started crying instead. (Failure). Coincidentally the movie version of Exodus was on television that night. I watched it. Paul Newman as Ari Ben Canaan. Oscar-winning score.

Went to sleep. With the soundtrack of Exodus and Paul Newman’ blue eyes – hell, just everything Paul Newman – keeping me company in my dreams.

The next day I told my parents I needed a little time, I’d start looking for a new job on Monday. Went to the laundromat, and while my clothes were spinning in the washer I finished Exodus. Also decided that I was going to go to Israel. Live on a kibbutz. Meet my own version of Ari Ben Canaan and marry him. Raise a bunch of sabras. (Look it up.)

I was still just along for the ride.

Now my family was never especially “Zionist.” Supportive of Israel? Of course. But I once asked my grandmother – whom family legend says walked from Poland to Germany with two little kids in tow (my Aunt Ida and Uncle Philly) and hiring herself out as a laundress, cook, whatever, to make money for the journey to Hamburg, where they took passage to America – why she didn’t go to Palestine instead. “Why would I go from a country where the Poles shot at Jews to a country where the Arabs shot at Jews just to live in tents and dirt?” she scoffed. “Here you can live like a mensch.” And when my dad, who was a fighter pilot in WWII – flew Mustangs in the CBI for you WWII history buffs out there – was approached by the fledgling – well, basically non-existent back then – Israeli Air Force to train pilots, he and my mother were not willing to give up their American citizenship, which was a real possibility at the time.

So when I announced that I was going to go to Israel for six months, live on a kibbutz, study Hebrew – no one in the family was exactly jumping for joy. Especially Grandma. But they knew I was unhappy – hell, they knew I was “lost” before I did – and were questioning their decision to pull me out of school, so, well, being good and loving parents, they said okay.

Yes, I must be the only Jew in America that hated her visit to the land of her forefathers.

Well, let me rephrase that a little. I didn’t hate Israel itself. I couldn’t stand the Israelis I met. The kibbutz I landed on was Shefayim, one of the original kibbutzim (which was cool), founded by Russian Jews imbued with Theodore Herzl’s dream, sitting on the Mediterranean coast. It was beautiful, but the kibbutzniks were another matter. I found them incredibly arrogant and judgmental towards America and the Americans. They were always saying really nasty things about the United States to me and the other Americans in my group of starry-eyed wanderers. And at the same time, they were trying to recruit us to move permanently to Israel. All they ever said to us Americans was that we were Jews who happened to be American and we belonged in Israel. All I ever said back to them was “No, I’m an American who happens to be a Jew, thank you very much.” Okay, so that didn’t exactly endear me to them, but c’mon. I wasn’t going around telling them that I thought the way they treated the Palestinians was shitty. I just wanted to learn some Hebrew, pick oranges in the orchards and milk the cows in the barn, and take side trips to Jerusalem and Haifa and Tel Aviv and the Sea of Galilee, explore the country of my ancestors.

After two months I called my parents and told them I was coming home. My father said, “Don’t come home. Fly to Paris or Rome or London or Madrid, instead. Call me when you land, I’ll send you money through American Express. Take advantage of being there. See Europe.”

An incredibly generous – and loving – offer.

But what I heard was “Don’t come home.”