REVIEW: The Best of Both Worlds 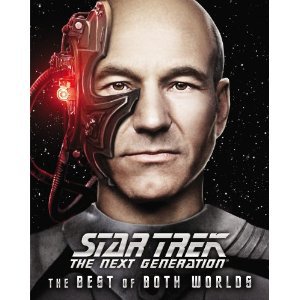 “The Best of Both Worlds” is a strong piece of television drama and was a defining moment for Star Trek: The Next Generation. The spinoff of Star Trek had been a ratings bonanza for Paramount Pictures, which syndicated the show and reaped huge profits. The fans, though, were slow to warm to the show and its characters, thanks to incredible infighting that sapped the inaugural season of coherence and left it to season two to show the series’ real potential. Season three, which is also out this week on Blu-ray, came to life thanks to a solidified writing staff under Michael Piller’s tutelage and the actors finally getting comfortable with their roles.

After eschewing two-parters, producer Rick Berman allowed Piller to end the season with a cliffhanger and as has been chronicled repeatedly, Piller wrote the first part thinking he was leaving the show. The resolution would be someone else’s headache. The plan was upended when Gene Roddenberry convinced him to stay on staff and he had to figure out the second half on his own. 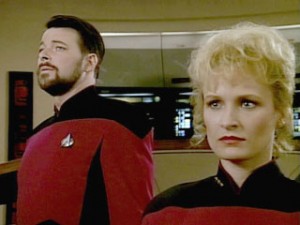 As a result, the first half is far stronger with most of the action left for the second part, draining it of the emotional drama we had come to expect. The Borg had been teased in a second season episode so their arrival was not unexpected, just earlier than hoped for. Lt. Commander Elizabeth Shelby (Elizabeth Dennehy) is brought to the Enterprise to help the flagship investigate a world devastated by, they believe, the Borg. She has been coordinating Starfleet’s plans to deal with the approaching threat but admitted their weapons planning needed eighteen to twenty-four more months. Along the way, she is all enthusiasm and arrogance, seeing First Officer William Riker (Jonathan Frakes) as being in her way towards a command spot of her own. Riker, for the third time, had been offered his own captaincy and was near-Shakespearean in his indecision. 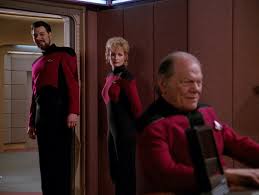 Riker was speaking for Piller, who was also conflicted about staying or going while Shelby reminded Riker what he was like as an eager First Officer, out to prove himself. Most of the cast is given something meaty to think about and discuss, including Guinan (Whoopi Goldberg). As a result, it felt like change was coming to the crew but first, they had to deal with the arrival of the first Borg cube in Federation space. Things are ratcheted up when the Borg ask for Picard (Patrick Stewart) by name and then abduct him. When he next is seen as the Borg named Locutus, you know this is not a dream, hoax or imaginary story. Left with little choice, Riker ends the season with the command to “fire!”

Fans spent the summer waiting to see what would happen. The fall of 1990 brought about the eagerly anticipated finale and Picard was of course rescued, Riker chose to remain in place, and the threat neutralized – at least for the moment. But the stakes have been raised for all concerned and nothing will be the same. As a standalone episode, the episode is totally devoid of the sort of the character-based drama that made the first half so rich and entertaining. No one is given a real moment to reflect on what is happening or at the end what has happened to them and their friends. 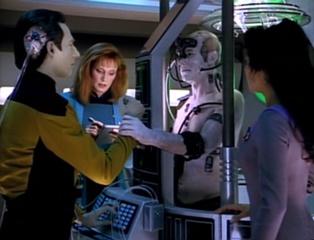 This beautiful transfer and upgrade is edited into a single 85-minute episode, making this disc unique. Yeah, it’s a bit of a money grab from Paramount but they at least sweeten the deal with some nice extras not found elsewhere.

Regeneration: Engaging the Borg (29:40) features Dennehy, Frakes and others from the cast along with makeup supervisor Michael Westmore and director Cliff Bole talking about the making of the episodes. They tell good stories and Dennehy in particular is honest in her 28 year old naiveté when she auditioned. Frakes, who had performed with her father Brian Dennehy, reveals that the actor had his qualms about her being on an SF show.

You also get additional insights in the all-new commentary from technical consultants Mike and Denise Okuda, Dennehy and Bole. There is an episode specific gag reel (5:28) as well.

It holds up thanks to the strong hand of Bole, a cast up for the challenge, and a real threat. The high definition upgrade makes it both an audio and visual treat.